The Conservatives have failed to produce a sustainable critique of Labour’s spending plans. 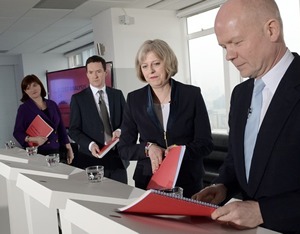 If the Labour-Conservative battle of spending credibility is a fight to the death, it is clear the Conservatives are falling short, indicating that behind a façade of Conservative tax and spend transparency lie inaccuracies and falsehoods, shielding colossal gaps in their own spending plans.

In a bizarre press conference, George Osborne was flanked by Sajid Javid, William Hague, Theresa May and Nicky Morgan, who claimed that Labour had only found £2.5bn worth of revenue raising, despite apparently making unfunded spending pledges including £1bn in Home Affairs and Justice and £2.9bn in education.

All of this was evoked to support the ‘tax bomb’ mythologies of old.

A move towards transparency, demonstrating to the electorate where their money will be spent, is no bad thing. Experts have long called for greater transparency on the subject of taxation and its close relation spending: indeed, as former home secretary Charles Clarke argues in the latest Fabian Review:

The HMT document has not only misleadingly compiled every Labour aspiration as if they were manifesto promises, it has also falsely assumed Labour would implement its plans immediately.

Similarly, proposals to have all main party spending pledges audited independently by the OBR have been blocked by Osborne, despite being supported by previous cabinet secretary Sir Gus O’Donnell, making the ‘dodgy dossier’ distinctly party political, despite having been written by Treasury officials.

At the same time, the fall-out from this spending credibility debate indicates the hollowness of Conservative ‘steady as she goes’ rhetoric (propagated by the party’s controversial election poster) which masks the darker truth behind Conservative spending plans.

Indeed, accusations that Labour might rock the economic boat sound laughable coming from a party that has committed itself to £7.2bn worth of tax cuts in the context of the IFS’s warning of a staggering £55bn of cuts still to come.

The British economy might be ‘a haven for growth’ for the likes of the FT, but for the rest of the country, even policies apparently designed to help the poorest leave them the worse off, irrespective of what the Conservatives might claim – as I argue in a recent Fabian blog.

This is not to mention the many Conservative promises which will cost billions – including support for HS3 and increasing the inheritance tax threshold – which seem to remain unfunded, as outlined by Labour List.

And if you’re not convinced by the numbers, just listen to Sajid Javid struggle his way through explaining Conservative spending plans.

It is clear, as argued by the well-respected IFS, that quite opposite to Conservative claims, it is the Labour Party that has been ‘the most cautious’ in avoiding promising unfunded give aways.

However, as Fabian work in the coming year will explore, the issues of taxation and spending will take on lives of their own in this fight to the death preceding the election.