﻿﻿When commentators argue that Charlie Hebdo was unethical, they are dedicating their time, influence and skill to arguing in support of the terrorists’ aim. 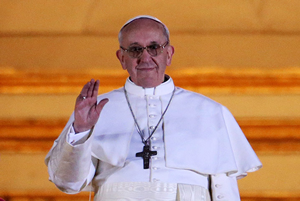 When commentators argue that Charlie Hebdo was unethical, they are dedicating their time, influence and skill to arguing in support of the terrorists’ aim

Over a week has passed since the Charlie Hebdo shootings, and a multitude of media commentators continue to speculate over possible interpretations of the tragedy.

Even the Pope has decided to weigh in on the debate, speaking to journalists on the day of the victims’ funerals.

However, like much of the discourse surrounding the attacks, his comments went beyond merely condemning violence.

Such views have become commonplace in the media over the past week, fuelled by commentators’ incessant desire to pass judgement on the cartoonists’ work in the wake of the terrorist attack.

The reasons for this are unclear. In some cases, commentators are undoubtedly inferring that the cartoonists acted irresponsibly and were implicit in their own deaths. Indeed, writing for the New Statesman, Mehdi Hassan went so far to equate the tragedy to an example in which a man might ‘have been lucky to get away with his life’.

The flippant implication that the cartoonists working at Charlie Hebdo were in some way responsible for their deaths can be easily interpreted as something approaching indifference towards the tragedy.

This victim-blaming is not only insensitive and unfounded, but is hugely atypical as a response to a terrorist attack in the West.

In fact, any suggestion that we should question the integrity of victims of a terrorist attack would’ve quite rightly been met with horror and disgust – such thinking is normally reserved for only the most radical extremists.

Why then, are the actions of the Charlie Hebdo victims so open to scrutiny? Perhaps, in a society where religious belief is widespread, it is because the attack was levelled at an unashamedly secular target.

Indeed, the Pope’s comments seem to suggest that he values religious comradery above concerns about violence. Illustrating his opinion that ‘you cannot make fun of the faith of others’ with the example; “if my good friend speaks badly of my mother, he can deserve to get punched,” is a dubious condemnation of murder and somewhat alarming in itself.

Despite this, many commentators have maintained that they are able to scrutinise the cartoons without resorting to victim-blaming. This is, of course, valid and response campaigns such as ‘Je ne suis pas Charlie‘ have received substantial public support.

The premise of these campaigns is to express condemnation of the shooting while also withholding support from Charlie Hebdo, which has been described as ‘offensive’ and ‘obnoxious’.

However, now is not an appropriate time to discuss our personal views of the cartoons. Not just because it is insulting to the victims of horrific and tragic violence, but because it hands terrorists a victory. It allows their actions to shape our public discourse.

The cartoons which initially provoked anger in the Islamic community were published in 2006, almost nine years ago. At the time, the legitimacy of the publication was widely discussed in the media.

The views of the Union of French Islamic Organisations and the French Council of the Muslim Faith both received significant coverage, while political figures such as Jacques Chirac and Nicolas Sarkozy also joined the discussion.

In short, the debate about whether these cartoons should’ve been published has already taken place. It occurred by peaceful, rational, democratic means. Those who took objection to the publication, despite receiving significant media attention, failed to adequately persuade the public to share in their view.

There is only one reason that anyone is criticising these cartoons this week. And that is a terrorist attack.

Had these two men not armed themselves and decided to attack the magazine’s offices, we wouldn’t be having debates about cartoons of religious figures, or whether, as the Pope recommends, we should shy away from ‘insulting the faith of others’.

When commentators argue that Charlie Hebdo was unethical, they are dedicating their time, influence and skill to arguing in support of the terrorists’ aim.

And this is time, influence and skill that commentators wouldn’t have spent if it was not for the attacks last week. It sends a message that if you want to reignite a debate and find sympathy for your opinions, you should do so via a horrific and violent event designed to dominate media coverage.

Such an approach clearly risks legitimising, perhaps even incentivising, terrorism.

This is what is so insidious about the Pope’s latest comments and the media circus surrounding the attack. When the Pope responds to the Charlie Hebdo shootings in order to decry those who ‘make fun’ of religions, he is capitalising on a terrorist attack to safeguard respect of his own institution.

When columnists insist that the cartoons were in bad taste, they are using terrorism as an excuse to push their personal cultural tastes.

And when public campaigns respond to the tragedy by insisting that we oppose the publication of such cartoons, we use a terrorist event as an excuse to propagate our own political goals.

Of course, this isn’t to say that we cannot reconsider our opinions or attitudes towards the cartoons over time. But it is to say that terrorism is not a legitimate reason for us to do so. To concede this would be to accept that violence is a reasonable method of drawing attention to an argument.

In an article for Vice, Will Self discusses the ‘fetishisation for free speech’ that has dominated media coverage of the Charlie Hebdo tragedy.

But perhaps we should be equally critical of a fetishisation of holding an opinion, exemplified by the media’s incessant need to dispense moral judgement as to whether the victims of a terrorist attack were right to publish the material they did.

Regardless of your views on cartoons published nine years ago, they’re superfluous to the response to the violent murder of 12 civilians last week.

Whether it be the Pope or a media commentator, we must avoid capitalising on a terrorist incident to vocalise our opinion on these cartoons and society’s attitude towards religious beliefs.

To even briefly consider whether you align more with the ‘Je suis Charlie’ or ‘Je ne suis pas Charlie’ campaigns is to capitulate to terrorists’ violent demands to engage in their debate.

There is only one suitable response – and that is the condemnation of violence.