A very small step, but any move that raises awareness of media treatment of women has to be considered a positive one 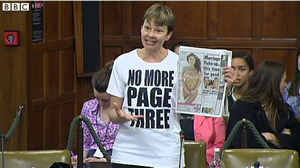 On Friday, model Lissy Cunningham had the dubious honour of being The Sun‘s last ever Page 3 girl. The Times has reported this morning that the newspaper will no longer be printing pictures of topless women in its print edition.

Quite how The Sun got away with the feature for so long is anyone’s guess. Expect outrage today from a confused Page 3 defence brigade who feel the decision is anti-feminist or contradictory – Twitter has already gone mad with posts scoffing at ‘feminazi’ hypocrisy, people genuinely unable to process why Page 3 is different to breastfeeding.

Today we should be celebrating that, for the first time in 44 years, the biggest picture of a woman in the UK’s most read newspaper will not be of her breasts.

We should be celebrating with those who have campaigned at the highest levels to remove the feature – Caroline Lucas is a notable example. She criticised Page 3 for normalising the notion that women’s primary function is to titillate men, and pointed out that its being freely available in eight places across the parliamentary estate did not send a great message.

Lucas also perfectly (if involuntarily) exposed the absurdity of Page 3’s place in the sanctimonious right wing press when she was asked to ‘remove or cover up’ her No More Page 3 T-shirt lest it cause offence in parliament.

In 2013, the Tory’s ‘Breakfast Club’ of MPs suffered a blow when the paper pulled News in Brief, a bubble which sat alongside the models ventriloquising Sun sponsored opinions on current affairs for them. It had apparently been a popular activity of the club to read out these ‘opinions’ in high pitched mimicking voices.

The No More Page 3 campaign says that its petition to The Sun’s editor David Dinsmore received 100 per cent Green support, 46 per cent Labour support, 34 Lib Dem, 5 Conservatives. Total MP support was 24.9 per cent, and female MP support was 5 per cent.

If Page 3 really is gone it is, of course, a miniscule victory. Today’s Page 3 features two Hollyoaks stars in bikinis with the caption ‘bust mates’. We can still see ‘Page 3 Lucy from London’ online.

Furthermore, The Sun shouldn’t bear all the blame for how the media’s horrible treatment of women shapes public perception. If I could have scrapped anything today, it would have been women’s magazines like Closer and Now, and their penchants for juxtaposing stories like ‘Holly Hagan on her amazing weight loss’ with harrowing ‘real life’ features about anorexia deaths, or interviews with overweight female celebrities about being bullied online.

I would also scrap the patronising and meaningless phrase ‘real women’; I would remove the Mail Online‘s tortuously long features describing women in bikinis ‘struggling to contain their curves’ (not being thin).

The Sun has not changed its tone or its sympathies. As Lucy-Anne Holmes, founder of the No More Page 3 campaign told Newsnight, it ‘hasn’t suddenly decided that women say, think and do interesting and incredible things, it’s still basically saying women are here for decoration’.

But any move that raises awareness of the harmful, backward and grossly hypocritical media treatment of female bodies is a sure step in the right direction.