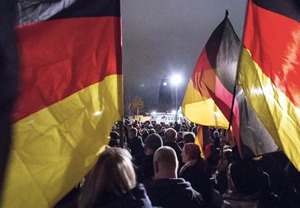 Angela Merkel meets with David Cameron today to discuss a range of global issues, from Ebola to Ukraine. Yet the one which will be most talked about is Cameron’s proposal to renegotiate Britain’s relationship with the EU.

So far Merkel has been keen to sound a conciliatory note, issuing a joint statement with Cameron emphasising that Germany agrees with reforms to make the EU more competitive and more focused on growth. Aware that how her words are interpreted could have a profound impact on the outcome of general election, the German Chancellor is bound to tread cautiously around this very sensitive topic.

However, behind the scenes there is a limit to how far Germany and other EU countries are willing to go to accede to Conservative demands. As Merkel herself has made perfectly clear, in comments that have been echoed by a number of other European leaders, restricting freedom of movement in the EU is a red line that cannot be crossed.

Since its creation, the single market has been based on the free movement of goods, people, services and capital. Tamper with one of these and the whole thing unravels. Say no to Polish labour, and Poland can say no to the British capital and goods that have flooded the country since it joined.

In other words, restricting the free movement of workers would mean leaving the single market and therefore the EU. The Tories should come clean and admit this.

Yet as well as being faced with impossible demands from his Tory backbenchers, Cameron is being embarrassed by his Conservative MEPs in Brussels, who are now allied in the European Parliament with Merkel’s arch-rivals in the Alternative Fur Deutschland (AfD) party.

This is the party which in recent weeks has become closely linked with Pegida, the far-right anti-Islamic movement organising mass protests in cities across Germany.

Frauke Petry, one the AfD’s three co-leaders, has been outspoken in defending Pegida and will meet with its representatives today.

Another AfD politician, Alexander Gauland, recently attended a mass Pegida rally in Dresden and said the movement are the party’s “natural allies,” while in a leaked internal memo AfD leaders said the party should target voters ‘who fear being swamped by Islam”.

This comes just days after Merkel described Pegida as being full of prejudice and hatred in her New Year’s Speech.

With friends like these, you might say, who needs enemies. By openly allying with a party that is being associated with intolerance and xenophobia in Germany, the Tories are further undermining their ability to deliver EU reform.

The huge counter-demonstrations in recent days have shown that the German people are rightly rejecting Pegida’s politics of fear. The Tories would do well to do the same.