The ComRes survey suggests that Labour could lose centre-ground votes to Farage. 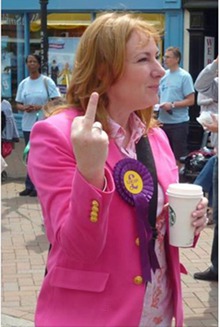 A shocking poll published in the Independent yesterday showed that voters view the Conservatives as more right wing than UKIP.

The poll, carried out by ComRes for the Sunday Mirror and the Independent on Sunday, asked people to position themselves on a political spectrum from 0 to 10, with 0 meaning ‘very left wing’ and 10 meaning ‘very right wing’.

There were some interesting disparities between the positioning of parties and their leaders;  David Cameron’s average score was 6.8 and Nick Clegg’s 5.1, showing how the coalition government has compromised the standing of both leaders with their respective supporters.

Ed Miliband scored 4.1 along with his party, and Nigel Farage scored 6.6. The Green Party is viewed as the most left wing, with an average score of 4.06.

This suggests that there are shifting perspectives about the definition of right wing. The perceived elitism of the Tories and the perceived racism of UKIP seem to be equal contenders for what it means to be right wing in modern Britain.

The average voter placed themselves at 5.3, just right of centre.

The poll shows that the Labour party are perceived as being closer to the average person than the Conservatives, who are considered more right wing than Prince Charles. However the poll could still spell bad news for Milband’s party, as it suggests that UKIP are beginning to encroach on centre-left voters.

When given a choice of Cameron, Miliband, Clegg, Farage and Boris Johnson, 43 per cent of those questioned said they would choose to have a meal with Boris Johnson, compared to 15 per cent who chose Miliband. Boris was also the most popular choice to have on a pub quiz team, and to have as a contestant on I’m a Celebrity Get Me Out Of Here.

Ed Miliband scored better on social issues, with 26 per cent of those questioned choosing the Labour leader to give advice to the poor on how to feed themselves, and 33 per cent choosing him to improve standards for working people.

Only three per cent of people who intend to vote for the Conservatives would most like to have a meal with Ed Miliband, and four per cent of Labour voters would choose to dine with Cameron.

A huge 44 per cent of people questioned said they would choose to spend Christmas with Boris Johnson, but only 15 per cent would choose him to administer first aid in an emergency.

The poll highlights the fact that being popular and being trusted do not always go hand in hand, and shows how unpredictable the election results remain.