No statistical basis in claim by education secretary that one in three unable to read or write under Labour. 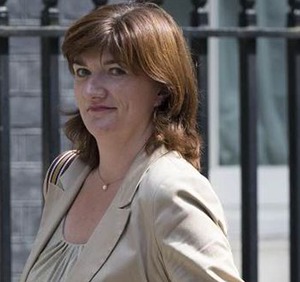 Education secretary Nicky Morgan has been reprimanded by the UK Statistics Authority for claiming that under the previous Labour government one in three children left primary school unable to read or write.

In a letter to Morgan, head of the UK Statistics Authority Sir Andrew Dilnot referred to comments made by the education secretary in the House of Commons on 10 December, when she told the House:

“If the shadow secretary of state wants to see a failure to prepare young people for the life of work, he ought to be thinking about the fact that under the previous Labour government one in three of our young people were leaving primary school unable to read and write. That is a shocking statistic.”

Sir Andrew also said in his letter that the education secretary made a similar claim at Conservative Party conference, where she stated that one in every three children finished primary school “unable to read, write or add up”.

However the figure cited by Morgan has now been challenged by Sir Andrew.

In his letter to the education secretary, Sir Andrew cited figures which show that in May 2010, 83 per cent of pupils reached the expected level of reading by age 11. He also referred in his letter to the apparent source for Morgan’s claim, which, contrary to Morgan’s claim, showed that in 2010 64 per cent of pupils achieved level 4 or above (the expected level at that age) in reading, writing and maths. 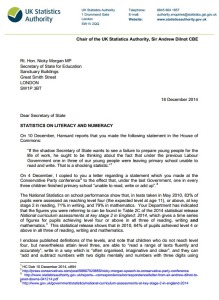 Quoting from the published definitions, Sir Andrew added that “children who do not reach level four, but nevertheless attain level three, are able to ‘read a range of texts fluently and accurately’, write in a way which is ‘often organised, imaginative and clear’, and they can ‘add and subtract numbers with two digits mentally and numbers with three digits using written methods'”.