There is no one type of ‘working person', and it’s an indictment of our politics that such an obvious point has to be made. 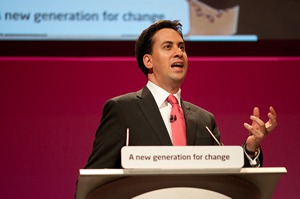 There is no one type of ‘working person’, and it’s an indictment of our politics that such an obvious point has to be made

A Labour politician tweets a picture of a house with three England flags and a white van in the driveway. The Labour leader sacks said politician and takes to The Mirror to declare, rather desperately, that Labour is still ‘the party of working people’.

Unfortunately for Miliband, the fact that he thought this was a proportionate and normal reaction to Emily Thornberry’s tweet merely highlights what he wanted to conceal.

It shows his profound disconnection from those who might once have been described as working class (an expression that is now eschewed in favour of ‘working people’, presumably because of its socialist connotations).

Miliband could simply have said that he disagreed with the (inferred) criticism contained in Thornberry’s tweet and that people should be able to fly the English flag with pride and without reproach.

Instead he felt that the tweet was an attack on the values and practices of ‘working people’. All of them.

It certainly seems to be more common to see England flags in poorer areas than in more affluent ones. But outside a major international sporting event, observation would suggest that only a small minority of people choose to fly the St George Cross.

Dan Ware, the owner of the house in question, is no more typical of ‘working people’ than Emily Thornberry is of millionaire homeowners. There will be many so-called working people who are not nationalistic and who wouldn’t fly an England flag, especially during a by-election where the candidate tipped to win has spoken favourably about repatriation of migrants.

There are millions of people in this category of ‘working people’, people with different jobs, backgrounds and cultures. There is no one type of ‘working person’ or uniform working class culture, and it’s an indictment of our politics that such an obvious point has to be made.

20 Responses to “What exactly does Ed Miliband think it means to be a ‘working person’?”