The more concretely we paint UKIP as a pointless third-rate Thatcher tribute band, the more effective it will prove. 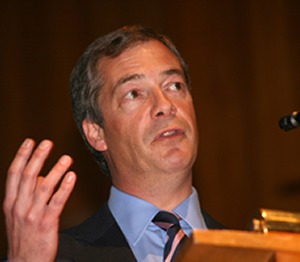 The more concretely we paint UKIP as a pointless third-rate Thatcher tribute band, the more effective it will prove

A sneering metropolitan elitist observation on the part of a self-confessed male moisturiser user this may be, but I can’t help noticing that UKIP has achieved its breakthrough without offering the punters any clear ideological self-definition. That might just be one aspect of its success.

Clearly it stands somewhere in the badlands to the right of the Tories, a fact that makes its advent as a serious political force all the more remarkable. Parties in that space have historically secured even fewer electoral victories than parties to the left of Labour, itself an extremely low bar.

Yet somehow UKIP is on the cusp of becoming a fixture in Westminster life. Douglas Carswell and Mark Reckless are only the outriders of a likely double-digit sized contingent of UKIP MPs come next May.

There is even a mercifully slim outside chance that it will be in government in little more than six months’ time; the Daily Telegraph reports that David Cameron is open to a needs-must coalition with the very people he once sneeringly dismissed as ‘loonies, fruitcakes and closet racists’.

Effectively, we have entered terra nullis; a Conservative Party that has traditionally hegemonised the entire political space between the softer end of social democracy and a certain strand of hang ‘em and flog ‘em imperialist nostalgia politics must all of a sudden share the bandwidth.

Once it garnered support numbering into the hundreds of thousands, commentators moved on to dismissing them as the respectable face of gin and Jag belt racism. They were ‘the BNP in blazers’, as the cliche went.

Wrong again. No Farage Youth are to be seen leafletting outside Jewish shops. UKIP is not a fascist or proto-fascist organisation, however hard some anti-racist campaigners try to hint otherwise.

But the confusion is understandable, given that even its own leadership has not seen fit to offer a succinct statement of UKIP’s political philosophy. Nigel Farage himself tends to rely on an incoherent grab bag of ideas, picking up whatever golf club is suitable for the required stroke.

Sometimes he is Nigel the libertarian, claiming the imprimatur of John Stuart Mill on the back of the one quotation from On Liberty that everybody knows by heart. But it is an odd libertarian that has difficulty with the notion of equal marriage or the abolition of borders.

Sometimes he describes himself as ‘green at heart’ and then goes on to reveal that he does not accept the reality of anthropogenic global warming, which does rather bring his grasp of the science into question.

More useful, I think, is Farage’s own admission that he is a Thatcherite but not a Conservative. His autobiography quotes Larkin’s famous if patently dubious contention that sexual intercourse began in 1963; what is clear is that for Farage, politics began in 1979.

Yet even to describe UKIP as neo-Thatcherite doesn’t hit the nail on the head. While the debt is obvious, Thatcherism was of its time and place, and that time and place is very different from where we are now.

With unions already emasculated, nationalised industry already privatised and council housing already flogged off at a steep discount, a second showing of the movie is impossible.

UKIP is accordingly reduced to being against things, most notably immigration and the EU, rather than for them.

Thatcher’s politics were famously categorised by Marxism Today – a surprisingly popular political magazine during her period in office – as ‘authoritarian populism’. It’s almost tempting to resurrect the tag, with the inevitable coda of ‘the second time as farce’.

What we have is populism in its most comedic form, a straightforward appeal to the wisdom of the imagined ordinary Brit, of no specified social class, combined with constant reiteration of the betrayals of ‘the elite’, syllogistically arranged to force the practical conclusion that it is time to throw the bums out.

UKIP under Farage may not be its finalised expression. Carswell has greater intellectual heft, a rudimentary agenda around direct democracy, and is said to be not unambitious.

But the moment this party articulates a specific ideological vision, it will be harder to pull off the double act of promoting itself as the alternative to the Tories in Clacton and the alternative to Labour in Heywood and Middleton.

Let’s not counter UKIP’s appeal by floating calls for reduced access to benefits for EU migrants, as Rachel Reeves did in the Daily Mail earlier this week; the route one football here is to repeatedly pin it down on NHS privatisation and scrapping maternity leave instead.

The more concretely we paint them as a faintly pointless third-rate Thatcher tribute band hankering after the politics of 30 years ago, the more effective it will prove.