Now is an appropriate juncture to push back against fatalism and despair and protect our achievements for the future. 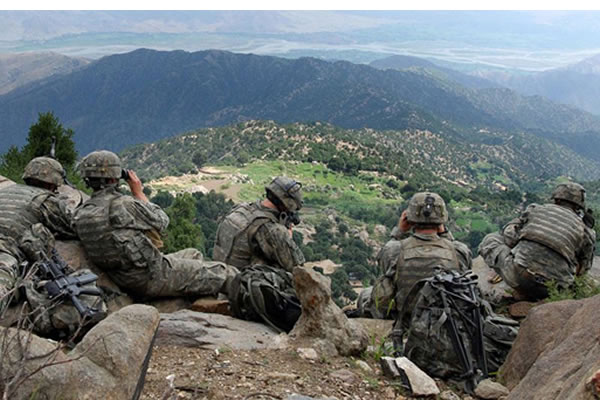 Since President Obama’s 2009 announcement of a ‘surge’ in Afghanistan that simultaneously announced the date of withdrawal, the western focus in Afghanistan has shifted to the exits.

The steady drizzle of bad news since then has reinforced this sense that it’s over, we’ve had enough and we’re leaving.

American and British troops quit Helmand in late October, basically ceding it to Taliban control. On Tuesday John Sopko, the head of the American auditor mechanism (SIGAR) said that efforts to promote economic growth in Afghanistan have ‘accomplished nothing.’

Given that it is not yet too late to avoid a repeat of Iraq, where hard-won gains were liquidated by the total withdrawal of western forces, it seems like an appropriate juncture to push back against this fatalism and despair.

Afghanistan has of course been very badly managed by the west. Some have blamed a ‘diversion’ of resources to Iraq for this but if the west cannot cope with two small wars at once we’re in real trouble, plus Iraq was always far more important in the war against Islamist totalitarianism.

Whatever the reason, however, the mismanagement in Afghanistan does not even suggest that the mission was unworthy. And the truth is that there have been real accomplishments to the western regency in Afghanistan.

We have removed from al-Qaeda its most important operating base. Throughout the 1990s al-Qaeda trained up to 20,000 jihadists at camps in Afghanistan, jihadists who then caused misery and mayhem around the globe from Bosnia to Algeria to Chechnya and finally on our own streets.

Handing back control of a state to al-Qaeda, where it can train and equip fighters, distribute cash and passports, and plot mass-casualty attacks against us without fear of disruption should be unthinkable.

We have shattered the enemy’s propaganda, which it relies on for recruits and finance. Al-Qaeda sought to position itself as the vanguard of a global Islamist insurgency. Like all insurgencies, this thrived on the sense of momentum and inevitability, and the west had played along.

‘Hit them and they will run,’ Osama bin Laden repeatedly said of the Americans. America gave up in Vietnam because of the casualties, it took just a few casualties to get them out of Beirut and Somalia, Americans hadn’t had the nerve to finish with Saddam Hussein in 1991, and there was then an escalating series of attacks up to  up to 9/11, and each time nothing serious was done.

The mujahideen had defeated the Soviet superpower: ‘Dealing with the pampered and effeminate Americans will be easy,’ bin Laden concluded. He and his followers did not expect the American-led counterstroke to the 9/11 massacre; they thought the US would up sticks in the region and leave the non-theocratic regimes to be overturned by Wahhabist revolutions.

We have raised the average life expectancy of Afghans from 42 years to 62 years. Next time some witless propagandist harps on about the West ‘killing Muslims’, it might be nice if the extra 100,000 Afghan children per year who now live because of medical facilities supplied by the west were factored into their arithmetic.

SIGAR’s recommendation to cut off USAID’s quarter-million dollars to the Afghans looks staggeringly misplaced when set against this fact.

We have opened up educational opportunities for all Afghans, and this has been especially liberating to Afghan women. In 1999, four percent of Afghan girls went to school; that was nearly 80 per cent by 2010.

We have discovered nearly a trillion dollars in untapped mineral wealth in Afghanistan. Predictably, for those determined to see calamity in Western military engagements, the New York Times then worried, ‘Next for Afghanistan, the Curse of Plenty?’ (As violence fell in Iraq at the end of 2007, opponents of the war worried about the rise in unemployment among Iraqi gravediggers!)

But while the ‘resource curse’ could well strike Afghanistan, extracting and selling these minerals would create more jobs and the graft could be more widely spread. Do not make the perfect the enemy of the good: to say that unless Afghan industry is run with the legal framework of Switzerland it is not worth having is puerile.

This list is by no means exhaustive, but what must be obvious is that these gains are set at risk if the Western protection and assistance is removed. Afghanistan is a textbook case of a problem that started small, was ignored, and then exploded  later.

After the Soviets were driven out of Afghanistan in 1989, the US, then led by the ‘realist’ George H.W. Bush, decided the U.S. had no further interest in the country. But that didn’t stop Afghanistan being the home-base for the largest terrorist attack ever to reach American soil.

All it would have taken in 1989 to pacify Afghanistan was an American investment of time and money (and maybe just a few troops and intelligence officers). By not making that small intervention early, and allowing Pakistan and Saudi Arabia to condition the aftermath, America had to make a massive intervention later.

This lesson has been reinforced in the Fertile Crescent. Had the war with Saddam been finished in 1991, Iraq would be much better off today. Had a small American garrison been kept in Iraq beyond 2011, it is hard to believe matters would be as bad as they are now.

And leaving Syria to run has allowed the formation of a Takfiri Caliphate that it will require US troops to destroy. An early intervention by air would have meant no troops were needed.

At present this can be done with between 10,000 and 25,000 US troops, mostly as embeds with indigenous armed units, and there are still (just) US allies who are confident enough that America will see this through that they will risk themselves to support this strategy. If this is delayed the number of U.S. forces needed and the degree of  US ‘unilateralism’ will grow.

Even as the drone war winds down, America will need to maintain the capacity to strike at Islamic terrorists in the badlands along the Durand Line. It is difficult to see how this can be done without U.S. troops on the ground.

The only other option would be relying on Pakistan, which is not just an unreliable partner but a significant part of the problem – and a withdrawal will again hand Afghanistan to Islamabad as a dependency for strategic depth in its never-ending war with India.

Barack Obama ran for the Presidency in 2008 holding up Afghanistan as the good war of ‘necessity’ against the bad war of ‘choice’ in Iraq. He was wrong about this. Even Robert Shrum, one of the lead strategists who ‘elevated the idea of Afghanistan as ‘the right war’ to conventional Democratic wisdom,’ conceded that this was a ‘reflexive’  policy – i.e. one meant primarily to draw a contrast with George W. Bush.

But leave the strategic myopia and party-political cynicism to one side. A statement of that kind cannot be withdrawn, and it is true that NATO cannot afford to be defeated in Afghanistan.

The fantasy that there is an ‘over there’ that we can avoid was shattered that Tuesday morning in September 2001 when 3,000 people were murdered in a couple of hours in New York, Washington, and Pennsylvania.

The foolish notion that Islamic zealots have appeaseable, concrete grievances should have gone down with the twin towers – the attacks were planned, after all, at a time when we were nearer a two-state settlement in Israel/Palestine than we have ever been.

The equally foolish notion that it is our strength that provokes the jihadists should likewise have been dispelled by now: President Obama has done everything the anti-interventionist crowd could have wanted, including outreach to Iran, and look at what has resulted.

To imagine that handing over Afghanistan to the Salafi-jihadists will bring us peace suggests a degree of faith that makes the holy warriors look positively sceptical.

6 Responses to “There have been real achievements in Afghanistan, but leaving puts them at risk”