Like a vote for Ukip, to fly the St George's Cross is as much to declare one's antipathy to the liberal, metropolitan well-to-do middle-classes as it is a protest against the EU. 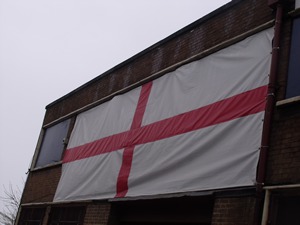 Like a vote for Ukip, to fly the St George’s Cross is as much to declare one’s antipathy to the liberal, metropolitan well-to-do middle-classes as it is a protest against the EU

In the wake of Emily Thornberry’s unwise tweet about English flags on a house in Strood, much has been written about the Labour Party being ‘out of touch’ with the provincial, English working class.

There is a case to be made for this, but to me, the central issue is that metropolitan liberals often don’t understand what is meant when people fly the St George’s Cross.

It isn’t so much displayed as a nationalist flag, as one would assume, but as a flag to represent the English working class.

Like a vote for Ukip, to fly the St George’s Cross is as much to declare one’s antipathy to the liberal, metropolitan well-to-do middle-classes as it is a protest against the EU and immigration.

I have lived in Kent for six years now and I have seen how St George’s Crosses have proliferated in this time.

As a born and bred Londoner, I was at first somewhat taken aback by the number of English flags and Union Jacks that I saw in the county when I first started visiting it regularly in 1998.

I put it down to the county’s naval tradition and its proximity to France, but an exponential increase in their display after the 2007 recession and the rise in immigration in the last decade wasn’t coincidence.

Sure, there is a lot of hostility to immigration in these parts. It isn’t particularly ideological. The Kent working class aren’t especially worked up about the EU.

Neither are they especially fussed about the colour of people’s skin.

Talk to people in pubs here and the two main gripes are: 1) ‘I don’t like having loads of people who don’t talk English’ 2) ‘I can no longer get my child an appointment at a GP/dentist/hospital’.

One appeal of the St George’s Cross (and UKIP) is that it’s very much disliked by the ‘out-of-touch liberal metropolitan elite’ – one of Nigel Farage’s favourite soundbites – a liberal elite that is seen as fond of employing Eastern European workmen, or a big business elite that is also perceived to have put English blue collar workers out of work.

This is why The Sun, The Daily Mail and much of the mainstream and social media was so eager to pick up on Thornberry’s tweeted photo, one that didn’t actually say anything derogatory at all.

It merely inferred what a lot of people assume north London liberals think about the white English working class.

When Londoners boasted at the European elections earlier this year that ‘we didn’t vote for nasty UKIP’ this only intensified the resentment among Kent people towards a capital city regarded as increasingly swaggering and snooty.

The antipathy is often strongest among ex-Londoners themselves who have left the city due to rising costs – nearly three quarters of a million Londoners have left their native city this millennium.

In my East Kent town I have neighbours from West Ham (a carpenter), Stockwell (family motor business went under last decade) and Fulham (retired). ‘Whereabouts in London are you from?’ features in nearly every conversation you have with a stranger here.

In Kent, the Cross of St George is now draped on balconies or flown in front gardens as routinely is the Stars and Stripes is in Republican parts of America.

If Ms Thornberry thought that house in Strood noteworthy, she should see Dover on St George’s Day: it puts Loyalist East Belfast to shame for its array of red on white flags.

The division between London – the name of the city itself is now a kind of swear-word in East Kent – and the rest of the country is as much responsible for the rise of UKIP as any EU directive on bendy cucumbers.

Most tellingly, Union Jacks, once flown outside people’s houses in these parts, disappear day by day. That symbol of the establishment continues to be supplanted by the St George’s Cross, that emblem for ordinary English white van men.