Tonnes of fresh fruits and vegetables are sitting in bin bags and landfill sites. 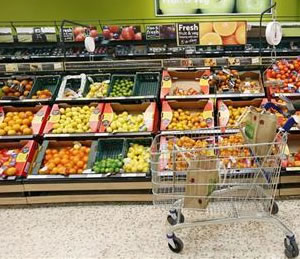 In Thessaloniki’s Lefkos Pyrgos Square on Sunday, 5,000 people gathered to be fed. The volunteers were given free food made of fresh, high quality produce that would normally be rejected by stores because of its appearance.

A misshapen carrot may taste the same as a straight one, may deliver the same nutritional value, but that does not stop it being vetoed by the strict cosmetic standards of supermarket chains.

The National Farmers’ Union said that in 2012, after some of the cosmetic regulations were relaxed following bad weather, 300,000 tonnes of ‘ugly’ fruit and vegetables made it into UK shops. That’s 300,000 tonnes of perfectly usable produce that would otherwise have been wasted.

Although the EU loosened some of its regulations in 2009, strict standards still apply for 10 of the most popular types of fruit and vegetables, including apples, lettuces, strawberries and tomatoes. They are rejected for reasons which seem outrageously trivial – apples that are not red enough or too red, cauliflowers that are cream rather than white, and strawberries with tiny skin blemishes.

This waste has implications for our health as well as for the environment. Many people struggle to afford healthy, fresh food, but junk food and ready meals are cheap. Whilst families battle with this dilemma, tonnes of fresh fruits and vegetables are sitting in bin bags and landfill sites.

It could be argued that supermarkets are simply responding to customer demand – most of us will instinctively overlook strangely shaped or coloured vegetables in favour of the prettier ones. But this is because our lack of exposure to unusual looking produce means that we assume there is something wrong with anything with a distinctive appearance. If we were more used to seeing fruits and vegetables of all shapes and sizes, we would not hesitate to buy them.

According to food policy journalist Peter Crosskey, ‘many farmers live in fear of supermarket buyers and are afraid to speak out’. Crosskey gives an account of a farmer who had to destroy 25 hectares of cauliflowers because they were too big for their retailer’s polythene bags; the farmer was banned from passing them on to the spot market by the retailer.

This is common among large retail chains, who fear finding produce they rejected being sold elsewhere at a lower price.

According to Tristram Stuart, founder of the Feeding the 5000 campaign, ‘4600 kilocalories per day of food are harvested for every person on the planet; of these, only around 2000 on average are eaten’. This means that more than half of it is lost on the way.

This loss is down to a combination of factors, including supermarket aesthetic criteria, misleading use-by dates, failure to plan shopping lists and over-buying. Offers such as ‘buy one get one free’ mean that many people simply buy more food than they can eat.

A study by the European Commission for Health and Consumers showed that 40 per cent of food losses in developing countries occur after harvest and during processing; in industrialised countries, over 40 per cent happens at retail and consumer level.

The participants in Greece this Sunday were given traditional Greek briam – potatoes, aubergines and courgettes baked with olive oil and sweet garlic. Feeding the 5000 is the flagship campaign of UK environmental organisation Feedback, and it has also been held in Amsterdam, Brussels and London.

According to the WWF, four in 10 Greeks admit to throwing away food fit for consumption at least once or twice a month. The economic crisis has gone some way to raising awareness of this; Boroume, a Greek NGO that distributes surplus food to charity, says that since the crisis more people are using ‘doggy bags’ to make meals last longer.

In Athens, the Christodoulio orphanage collects ‘ready to eat’ food every day from the local AB Vassilopoulos, one of the country’s largest supermarket chains. The food, which feeds 34 children in the orphanage, would otherwise be thrown away.

We need to organise the redistribution of surplus food to charities, homeless people and those who are struggling to feed themselves healthily. It is a simple solution, but with the right administration it could change everything.