The Vatican is laden with priceless treasures, and has an investment portfolio of around $8 billion. 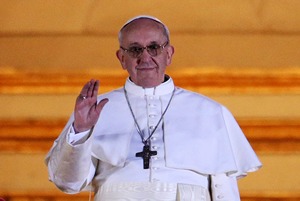 The Vatican is laden with priceless treasures, and has an investment portfolio of around $8 billion

For socialists like myself, being told that profits are coming at the expense of ordinary people isn’t at all surprising.

I know that if mankind continues to exploit the earth in the interest of capital gain, the earth will respond with destruction and extinction.

However, to read last week that the head of the Catholic Church, His Holiness the Pope, has cautioned mankind against greed while urging world leaders to tackle the problem of climate change was so surprising that I was sure I was reading a parody of events.

Has Pope Francis simply forgotten his own church’s history of exploitation and self-indulgence? Is he completely unaware of the vast amount of wealth that the Catholic Church has accumulated throughout its two thousand year existence?

Indeed, we need only look inside Vatican City to get a mere glimpse into the immense wealth belonging to the church.

St. Peters Square is drenched in marble and gold. The Sistine Chapel – home to one of the most famous ceilings in the world – is only as magnificent as it is because the church had enough wealth to commission its existence.

Vatican storerooms are laden with priceless art treasures and stolen artefacts that date back to when the Romans routinely sacked and pillaged new territories.

Yes, it is hard to take the Pope seriously on the matter of greed when we see where he and his comrades live. It’s even more difficult when we see him (and his predecessors) sitting on a throne that is literally plated with pure gold.

Equally troubling though is the Vatican’s somewhat impressive investment portfolio of around $8 billion (most of which was completely tax-exempt until 2013 when the Italian government announced that the Vatican must pay taxes on their non-religious properties).

Large investments with everyone from the Rothschilds of America, Britain and France to some of the most powerful multinational corporations like Shell and General Motors, the Catholic Church has and still does benefit from a free market global economy that is solely motivated by profit.

Add the vast amount of Vatican gold ingots, medals and precious coins stored within the vaults of the U.S. Federal reserve, and it is fair to say that we shouldn’t hear another word about the human and environmental consequences of greed and the free market until the Pope has answered some fairly obvious questions.

Firstly, if eradicating global hunger and malnutrition is a primary concern of the Church, why doesn’t he send his hierarchy of princes (yes, princes!), bishops, priests, monks and nuns across the globe with all of the churches’ riches – every single cent and every piece of gold – and give that wealth to the impoverished?

That way the Vatican would be free to concentrate on what we’re told is the true essence of Catholicism – creating a personal relationship with God.

Secondly, if the Pope sincerely believes that ‘market priorities’ and the ‘primacy of profit’ are hindering the struggle against hunger and malnutrition, why isn’t he apologising for the Church’s long history of market investments?

Why isn’t he selling off every single share the Vatican owns and using that money to fight global poverty?

Until these questions are answered, the Pope should not be taken very seriously on matters of greed and the free market.

Callum Hunter is a freelance writer and human rights activist. Read more of his work here