If we send the message that police and politicians can turn a blind eye to illegal behaviour simply because they don't like the law, the entire justice system is undermined. 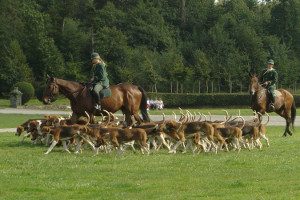 If we send the message that police and politicians can turn a blind eye to illegal behaviour simply because they don’t like the law, the entire justice system is undermined

Ten years ago, on 18 November 2004, the Hunting Act was passed, banning hunting with dogs in England and Wales. It became law three months later, and marked the culmination of years of campaigning by activists and animal rights groups.

But hunting has not been stopped. Even before the Act was passed, 50,000 people signed a petition stating that they would be willing to break the law in order to continue with the sport.

The strength of feeling was remarkable; especially memorable was the philosopher Roger Scruton’s comparison of the pro-hunt campaign with the civil rights movement in America:

“By cancelling our viewpoint and our demands, and regarding us as a sub-human species, they are regarding us in the way that American blacks were regarded at the time of the civil rights movement”.

What is interesting about this statement is that it perfectly encapsulates the way that many hunters view what most people would view as a hobby as a human right. The Countryside Alliance continues to use this notion in its campaign for repeal which has the tagline ‘fight Prejudice, fight the ban.’

But is it really prejudiced to oppose fox hunting simply because a minority of people support it? A poll conducted last year by Ipsos Mori showed that eight out of 10 people were in favour of sustaining the ban. The poll also found no real difference between urban and rural opinions, which may seem to refute claims that the ban would sound the death knell for the rural economy.

Of course it is prejudiced to deny rights to a minority, but, it is not a basic human right to kill. Similarly, we do not usually tend to define minorities by their hobbies.

Regardless of what you think about the hunting ban, the more pertinent point is that a decade on, the law is not being properly enforced, and this is an affront to the integrity of the legal system. Not only that, Tory support for – and in some cases, participation in – hunting shows a flagrant disregard for public opinion.

In the 2010 Coalition Agreement, David Cameron promised MPs a free vote on overturning the ban, but ultimately conceded that they had little chance of repealing it. Most Tory MPs support a repeal of the ban but Labour and the Liberal Democrats want to keep it, meaning that a Commons vote would most likely reaffirm the ban.

But last Boxing Day, several Tory MPs took part in traditional hunts in their constituencies. Most of the hunts managed to stay within the law because they were chasing a scent and not an animal, a form of the sport known as drag hunting, but there could hardly be a better way for the Tories to harpoon themselves with the working public.

The ban is routinely ignored – but by people who can afford expensive horses and guns and all the pomp and ceremony of the chase. What does this say about equality?

There have been 340 successful prosecutions in the past decade, but this does not reflect the amount of hunting that still goes on. Furthermore, the punishments handed down are much more lenient than for other forms of animal cruelty.

The Hunt Saboteur Association is an organisation that stages non-violent protests on hunting grounds. Participants use video recordings to try to take more breaches of the law to prosecution.

However, the activists are just as likely to be prosecuted as the hunters. On 25 October, a hunt in Surrey was interrupted by saboteurs trying to end the misery of a deer that was being savaged by dogs. When the police showed up, four of the saboteurs were arrested. Lee Moon, the organisation’s spokesperson, said that ‘the police were happy to act as private security’ for the hunters.

The prosecution cases that have happened highlight exactly what the public’s problem is with hunting. In 2013 four members of the Middleton Hunt were arrested, and video footage from the League Against Cruel Sports showed one of the huntsmen handing over the fox to the dogs so they could ‘rag it’ – tear it to bits. Is there really a place for this in British society?

In 2010, a terriersman for the Ullswater Foxhounds was filmed beating a fox to death with a stick – he was fined £250 and ordered to pay £900 in costs. There would have been public outcry if this was a domestic animal – the fine is the same amount as the one ordered from Mary Bale, who infamously put a cat in a bin in 2010.

If this ban which has infuriated so many people is going to remain in place, then it has to be upheld. Those who break it have to be properly prosecuted, and given sentences that will deter others. If we send the message that police and politicians can turn a blind eye to illegal behaviour just because they don’t like the law, then the entire justice system is undermined.

13 Responses to “A decade on from the ban, fox hunting is still thriving”