The row over TTIP and the inclusion of an ISDS mechanism is growing. 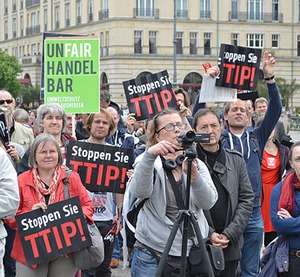 The row over TTIP (the Transatlantic Trade and Investment Partnership deal between the EU and the USA) and the inclusion of an ISDS (Investor State Dispute Settlement) mechanism is growing almost daily.

Followers of the progress of the TTIP talks will be aware of the twists and turns on policy in regard to ISDS which has resulted in the EU president having to clarify the EU’s position, over-rule his new trade commissioner and now ask his number two to sort it out.

The new trade commissioner Cecilia Malmström is having a torrid time.

Following her confirmation hearings, she sent Twitter messages about ISDS eventually clarifiyng that no investor-state dispute settlement mechanism would be part of that agreement – before stating they would be.

She said an old draft of here speech had been used at the confirmation hearings.

However it transpires that Martin Selmayr, the chief of staff for European Commission President Jean-Claude Juncker, had (alledgely) changed her written testimony, in the TTIP section, stating that ISDS was a non-runner.

This generated a row between the EU and the Canadian government, which thought that they had a done deal on the EU-Canadian Free Trade Agreement known as CETA.

Judith Kirton-Darling, the Labour MEP for the North East said:

“The document with the tracked changes was leaked. It was incredible. At that level nobody forgets to take it out. They wanted us to see it. It’s part of the politics.”

An article also appeared in the Dutch publication NRC Handelsblad which suggested that Juncker had decided to remove the ISDS from the TTIP negotiations following growing pressure across Europe from politicians, anti-TTIP groups, unions and the public.

“My Commission will not accept that the jurisdiction of courts in the EU Member States be limited by special regimes for investor-to-state disputes. The rule of law and the principle of equality before the law must also apply in this context”.

He now has swiftly handed the problem to somebody else.

“I have asked Frans Timmermans, in his role as first vice-president in charge of the Rule of Law and the Charter of Fundamental Rights, to advise me on the matter. There will be no investor-to-state dispute clause in TTIP if Frans does not agree with it too”.

Timmermans is Junkers number two and a former Labour politician and a member of the S&D group in the European Parliament, which may help seal ISDS’s fate.

Junker’s decision also sidelined Sweden’s Cecilia Malmström, the trade commissioner who appears to be at odds with her president.

ISDS grants a companies the right to initiate dispute settlement proceedings against a foreign government, if the company or investor feels their interests (or profits) have been harmed.

Earlier this year, a public consultation the commission launched into ISDS inclusion in TTIP attracted 150,000 responses, with RU citizens fearing their governments could be sued by multinational corporations for loss of profit.

The first ISDS clause appeared in an agreement between Germany and Pakistan in 1959, with Germany seeking to protect its companies from loss of investment due to the volatile political and economic environment in Pakistan. It appears that Germany that are now leading the opposition to ISDS in TTIP.

A good example of the how ISDS works is the Uruguayan government versus Philip Morris case. The Swiss based tobacco giant accused Uruguay of violating the bilateral investment treaty between Switzerland and Uruguay, saying that anti-smoking legislation (such as Uruguay’s ‘single presentation’ ordinance and its requirement that health warnings cover 80 per cent of a cigarette pack) devalues its cigarette trademarks and investments. The company is seeking financial compensation.

And pressure is growing in the UK. According to Kirton-Darling, at a meeting of MPs, MEPs and Lords recently she said that Conservative Lords were raising the same concerns as Labour and Liberal Democrat Lords:

“There are widespread concerns, not just on the left of the parliament, but also from voices in the Liberal Group and the Christian Democrat Group, which are raising issues about ISDS as a system. Conservative Lords were raising the same issues. It’s not cut and dry. The debate is there. It’s not a done deal,” she said.

3 Responses to “The row over TTIP rumbles on”