The desire to 'get on' isn't confined to affluent Westerners. 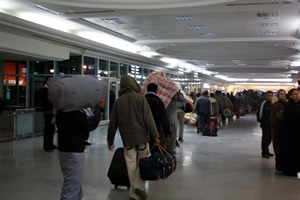 The desire to ‘get on’ isn’t confined to affluent Westerners

The mayor of Calais has been sounding off like a Daily Mail editorial. On immigration, Britain is a ‘soft touch’ and its benefits system acts like a ‘magnet’ for migrants, Natacha Bouchart told the Home Affairs Committee yesterday.

“You have a much more favourable regime in Britain than other countries. The second thing is the entitlement to benefits of £36 which are given to asylum seekers or migrants, which is a huge amount for people who have nothing in their lives.”

This echos the narrative of much of the UK press as well as of UKIP, the Conservative Party and sometimes Labour.

But how true is it? Apart from anecdotes and hearsay, what actual evidence is there to suggest that migrants are flocking to the UK for our supposedly generous benefits system?

It is common currency on the right that Britain has the most generous welfare system – if not in the world, then at least in Europe. Yet this is a myth, according to the Economic and Social Research Council’s Centre for Population Change (CPC), with a number of other EU countries as generous as Britain in terms of social security per head: 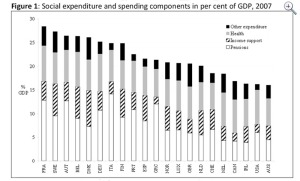 This data is also from 2007, before many of the rules about migrants claiming benefits were tightened by the coalition.

The data from 2010 also shows that, in terms of social security spending per inhabitant, France, Germany, Denmark and the Netherlands all spend more in real terms than the UK on social security: 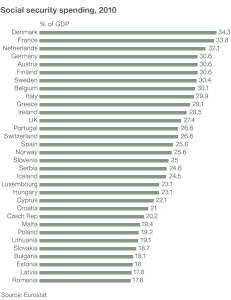 There are really two separate issues here that are very often conflated. One is Asylum seekers and refugees trying to come to the UK and the other is EU citizens exercising their legal right to come and work here.

Last year a European Commission report concluded that there was no evidence of systematic or widespread benefit tourism by EU nationals migrating within the EU, including to the UK.

And anyway, EU migrants can’t simply sign on to claim Jobseekers Allowance as soon as they arrive in the UK – they must wait for three months; and even them they have to pass a tough Habitual Residence Test set before they can make a claim.

And what about the coalition’s welfare reforms that will apparently make a life on benefits impossible for any British citizen? Why would it be any easier for an EU citizen to milk the system?

But this isn’t what the mayor of Calais is actually talking about. It isn’t migrants from Poland and Romania that are camped out in Calais hoping to sneak into the UK – they can already come here legally. This isn’t about immigration per se; this is about the asylum system.

Many of the people we are talking about in Calais haven’t simply left their country for the sake of a better paying job; they are fleeing war-zones like Syria, tyrannies such as Egypt or hunger that plagues many parts of Africa. As Ms Bouchart herself put it, most of the estimated 2,500 refugees in Calais are Eritrean, Ethiopian, Sudanese, Syrian, Egyptian, Lebanese, Iranian and Iraqi – hardly bastions of freedom.

It would be fairly far-fetched to claim that these people are fleeing their homelands due to Britain’s generous benefits system.

However it is unlikely that putting an end to this would deter asylum seekers from coming to the UK for the reasons I’m about to set out; but such a policy change would result in destitute asylum seekers sleeping rough in and around London. Not exactly good policy.

There is, though, one important reason that people often want to come to Britain ahead of other countries in Europe. It isn’t the benefits system, but has more to do with the international prestige this country (still) has overseas.

Before you scoff, this isn’t jingoistic hyperbole – anyone who has travelled extensively will know exactly what I’m talking about.

When I was travelling in South American a few years ago I met plenty of people who wanted to leave their native country and it was usually because they wanted to come to the United States or Britain. Not to claim benefits, but to work and make money. Almost all had the rose-tinted view that in Britain and the US if you worked hard enough the opportunities were there and you could prosper. Naive perhaps, but very different from wanting to ‘milk the system’.

For those fleeing war zones like Syria and Iraq, it’s fairly obvious why they might think of leaving – and it has nothing to do with signing on. Similarly, for those who aren’t fleeing persecution the long and perilous journey to the UK isn’t one that’s taken lightly, nor with the aim of coming to the UK to carry on being poor. It is made because the UK is viewed as a land of opportunity.

In other words, people want to come to Britain because it is a good place to live. That’s a profoundly positive thing.

The biggest irony of all is that it is right-wingers who claim to understand the human desire to ‘get on’ and aspire to something better. Someone ought to point out that this instinct isn’t confined to affluent Westerners.