At a time when millions of Londoners need affordable housing, local authorities are knocking it down and replacing it with luxury flats. 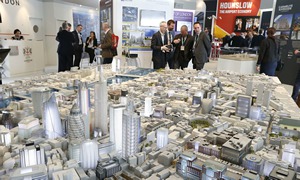 At a time when millions of Londoners need affordable housing, local authorities are knocking it down and replacing it with luxury flats

If you go down to Kensington Olympia on Wednesday, you might be able to peek through a window and watch as London’s skyline is shaped inside. The venue is hosting MIPIM, the world’s biggest property fair, attended by politicians, developers and investors from over 90 countries.

Its participants play a key role in advancing a situation that divides everyone living in London in two: an affluent minority benefiting from a booming property market and a majority struggling under a severe housing crisis.

Just south of the roundabout in Elephant and Castle, the Heygate Estate has become the paradigmatic example of the MIPIM-model of property development – what those profiting from it would like to call ‘regeneration’. Lend Lease, an Australian developer with several stalls at this week’s event, are demolishing the Heygate council estate to make room for 2400 luxury flats. For thirty years, Heygate provided Southwark with 1200 social-rented dwellings; the new development will contain 79.

Heygate’s former tenants have been moved out of their homes to make way for their richer replacements. Those who refused were dealt with via a Compulsory Purchase Order. Average compensation for a one-bedroom flat was £95,480; the cheapest equivalents in the new development will cost £310,000. Consequently, the vast majority have been scattered across south London.

At a public inquiry into the process, former Heygate leaseholder Terry Redpath traveled in from Sidcup to describe how he was affected. “I could no longer afford to stay in the area,” he said. “The compensation I was offered plus £45,000 of life savings bought me a terraced property 15 miles out of London.”

Heygate encapsulates how regeneration works – and why social cleansing is a more accurate term. At a time when millions of Londoners are in acute need of affordable housing, local authorities are knocking it down and replacing it with luxury flats. An affluent professional class moves in and, assisted by hedge fund managers with no intention of living in the homes they buy, entirely displaces the existing community.

Southwark Council is far from alone in encouraging this. Opposite Kensington Olympia, an £8 billion redevelopment involves the demolition of 22-acres of council housing to make room for 6000 luxury flats. The starting (and, for most of us, startling) price for a one-bedroom flat in the new development is £595,000. No additional social housing is being built but, on the plus side, a massive 11 per cent of the new builds will meet ‘affordable housing’ quotas.

But what do these quotas actually mean? They limit rental price to 80 per cent of the local market rate. According to the estate agent Foxton’s, the average rent for a one-bedroom flat in Earl’s Court is £476 a week. So a one-bedroom flat in the Earl’s Court development could be rented out at £380 a week – £1500 a month – and still be described as ‘affordable’. Bear that in mind the next time you hear Boris Johnson wittering on about affordable housing.

These examples – and there are many more, including the Carpenters Estate in Newham – mark the first ripples of a wave that is set to engulf London over the next few decades. Londoners reading this have probably heard of Johnson’s decision to turn the Royal Mail’s Mount Pleasant sorting office into 700 luxury apartments.

This is just the tip of the breaker: a survey by the New London Architecture think-tank showed that, of 236 buildings of more than 20 storeys that are either planned or under construction, 75 per cent are luxury flats.

Nourished by all this activity, an entire industry has sprung up dedicated to helping developers sidestep planning requirements that are intended to control a project’s impact on the local community. In every instance I’ve cited and more, the amount of social and affordable housing, along with the size of the levy paid to the local authority, has been hugely eroded as time has gone on. Plush consultancies exist solely to help developers circumnavigate specific sections of national planning policy.

In light of this, some local authorities have sought to be stricter about the projects they approve. In Deptford, the historic Convoy’s Wharf caught the eye of the Hong Kong-based mega-developer Hutchinson Whampoa, who drew up plans to build three vertiginous towers on the site.

Lewisham Council opposed the development due to a lack of affordable housing. But this wasn’t enough to stop it. Hutchinson Whampoa simply took their claim over Lewisham’s head and directly to Boris Johnson, who waved it through after a single three-hour session. It’s useful to bear this anecdote in mind, in case you meet anyone yet to notice the real, steel-edged interests glinting beneath Boris’s bobbing straw-topped head.

This, then, is the backdrop to MIPIM’s champagne-soaked debut in London. Boris is the event’s keynote speaker. Southwark Council officials will be out on a jolly, trotting along the South Bank to enjoy a lavish day far from the usual experience of working in local government.

Meanwhile, most Londoners find themselves with no influence over the way their city changes, peeking through the window at a process that is selling off public land and pushing the poorest of them out of their homes.

Toby Hill is a London-based journalist and writer

6 Responses to “The MIPIM property fair: everything that is wrong with regeneration in London”