There are options for the next government beyond full replacement or scrapping the system. 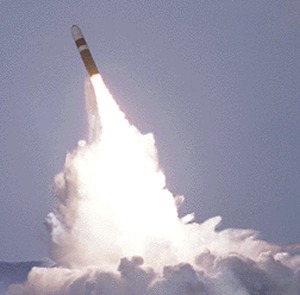 Tensions with Russia and the need to assure NATO allies on or near its border have dashed any possible hopes for short-term progress in negotiated nuclear disarmament.

Casual observers may conclude that this closes the debate Britain would have had over Trident renewal in 2016 when the vote over constructing new follow-on ballistic missile submarines was expected in Parliament.

The received wisdom that Labour can only lose on this issue (whatever its position) is understandable, given past experience, but maintaining some policy flexibility in position up to and beyond 2016 would be sensible, for the leadership, for the party and for the country. There could yet be severe pressures to reconsider.

The most obvious is cost. As reported by BASIC’s Trident Commission (p.16), the running and capital costs of the Trident programme are projected to reach around £4bn in today’s prices from 2019 and throughout the following decade and beyond, consuming a full third of the defence procurement budget for that period.

We simply don’t have the money for the defence equipment plans currently in the pipeline – something has to give. Ambitions will have to be delayed or scaled down. Are we seriously saying that an upgraded Trident system – the most sophisticated on the planet – that may never become relevant to British security again, is more important than the conventional systems our armed forces use every day?

The second is the widely-acknowledged problem that a full like-for-like replacement will harm Britain’s non-proliferation diplomacy by contributing to a continuing nuclear modernisation race. The nuclear weapon states are legally committed to negotiations to bring an early end to the nuclear arms race. The health of the global nuclear non-proliferation system depends upon them. They had to agree in 2010 to an Action Plan that included clear early commitments to disarmament moves, but progress since then has been near zero.

Frustration amongst the non-nuclear majority is mounting, worsened by the failure to convene a conference to discuss a WMD free zone in the Middle East. Some states are already talking about a nuclear ban; that could shake the NPT (Non-Proliferation Treaty) community.

Others, losing patience and confidence in the integrity of the nuclear weapon states or the efficacy of their nuclear guarantees, could quietly be developing their own nuclear weapon options, ready to break-out at the right time. Nuclear power ambitions in the Middle East go beyond Iran.

The next NPT Review Conference, held every five years, coincides with the General Election. Last time the new coalition government announced cuts in UK arsenal within days of its creation. A new government will need to prepare its positions and advocacy to ensure that it plays a productive role at this most critical of moments.

The received wisdom is that there are few votes in taking a nuanced position on Trident, and potentially many to lose if voters sense a party is faltering on their commitments to defence of the realm.

But there is much at stake for British and global security if opportunities are lost to engage Russia and China in negotiations aimed at reducing the salience of our collective nuclear arsenals. Our nuclear arsenals remain poised to annihilate the populations of our negotiating partners. Is this conducive to the global governance required to tackle the major issues of our time?

There remain options for the next government beyond full replacement or scrapping the system, including further delay, reduced readiness, reductions in warheads, or different systems altogether. Each could end up delivering substantial savings for alternative defence or public investment.

It may not be that these attract the attention or excitement in the middle of an election campaign – interest within the public is hardly high at present. But this should not lead a new government to assume they have no room for maneuver, or for a new Parliament to blindly vote in favour of current plans in the belief that there is no alternative.

Paul Ingram is the executive director of the British American Security Information Council and was host of the BASIC Trident Commission. He writes in a personal capacity