As the Kremlin looks on with glee, the Labour message must be clear: not in our name. 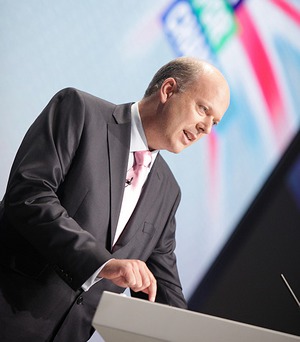 As the Kremlin looks on with glee, the Labour message must be clear: not in our name

The prime minister wore a Help for Heroes wristband to work this week, displaying his support for the UK military charity as he delivered his speech to the Conservative Party Conference.

But checkout assistant Adam Austin had some trouble when he tried to do the same last year. And now David Cameron wants to scrap the law Adam relied on to challenge supermarket chain Morrisons who suspended Adam for wearing his Help for Heroes wristband to work.

Mr Cameron’s friend Rebekah Brooks invoked the same law, though the newspapers she worked on constantly attack it, to try and prevent her “affair” letter to Andy Coulson being put before the jury in the hacking trial. Nevertheless, the Conservatives tell us, that law – the Human Rights Act – has to go.

In its place, the Tories propose some rights for some people some of the time. They propose the UK stay part of the European human rights framework but that we choose when and how to comply with it.

As the Kremlin looks on with glee, and British lawyers tear their collective hair out at the legal incoherence of the proposals, the Labour message must be clear: not in our name.

Justice secretary Chris Grayling has said “we cannot go on with a situation where crucial decisions about how this country is run and how we protect our citizens are taken by the European Court of Human Rights”.

Grayling can’t be talking about the volume of ‘crucial decisions’, since only about ten judgments a year are made against the UK before the European Court judges in Strasbourg.

On substance, we may well question why it was left to ‘foreign judges’ to grant British Airways employee Nadia Eweida the right to wear a crucifix to work, for example. But the nature of international oversight is exactly that, to act as a final backstop for citizens who feel they have been wronged by their government.

In fact, the Human Rights Act stems the flow of cases going to the Strasbourg court because it makes our courts apply the European Convention rights first. Courts from Newcastle to the New Forest are making human rights decisions as I type, resolving cases that may otherwise have been taken to the European Court – where, incidentally, a British judge always sits on British cases.

The Conservatives and their allies in the press have created the bogeyman ‘human rights Europe’ because the ‘other Europe’, the EU (which has nothing to do with the European Convention on Human Rights, someone should tell CCHQ) is too divisive for their party.

So will we withdraw from the European Convention and join Belarus as the only non-signatory European country? Not quite. The Conservatives propose that “every judgement against the UK will be treated as advisory and will have to be approved by Parliament if it is to lead to a change in our laws”.

That’s right, we will be part of the club, but only respect the rules we like. When you next get a speeding fine – just treat it as advisory, that’s how the law works under these guys.

The problem for Grayling and co. is that if you create a straw man, you will eventually get found out. Today’s announcement contains the explicit commitment that “a foreign criminal, guilty of causing death by dangerous driving and so taking away the rights of another citizen, would not be able to claim family rights to stay in the UK.”.

Would that be a reference to the tragic case of Amy Houston where due to Home Office incompetence the offender in question wasn’t deported? Why get the Home Office in order when you can blame it on the Human Rights Act instead?

The Tory plans also include limiting the use of human rights laws to “the most serious cases” and “balancing rights and responsibilities”. Our courts already dismiss trivial cases or those which they deem not to raise a human rights claim – like the pornography in prison claim, which was thrown out, contrary to what was reported in the popular press.

So too, the human rights framework provides for interference with rights where responsibilities have not been honoured – hence why we can imprison people, fine them, ban them from going certain places and so on.

And the irony is that these new criteria would end up being adjudicated by the courts in the end anyway, much to Grayling’s annoyance I’m sure. But that’s how democratic systems work – parliament makes the law, the courts interpret it.

No legal system is perfect. There will always be cases on which reasonable people will disagree, but to throw out the post-war human rights framework – which is effectively what the Tories propose, because rights are either for all humans, or they aren’t human rights – is to dishonour the legacy of those who after the Second World War said ‘never again’. Never again to an overbearing state doing what it likes to whoever it likes. Never again to the tyranny of the majority.

The biggest threat to our human rights comes not from European judges in Strasbourg but from the Conservative party. We need to take this fight to the doorstep, not just for our sake, but for those looking on from Moscow and Ankara, where even Grayling would agree, the human rights abuses are serious and the European system needed more than ever.

Amy Williams was a researcher on the Human Rights Futures Project at the LSE’s Centre for the Study of Human Rights and carried out research for the Commission on a Bill of Rights. She now works in Parliament