For NHS campaigners, it is vital we keep the pressure on over TTIP. 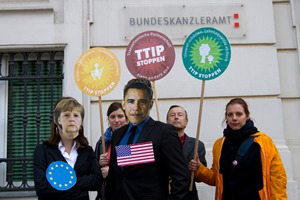 For NHS campaigners, it is vital we keep the pressure on over TTIP

Activists from across Europe will descend on major cities at the weekend to protest against the imposition of the Transatlantic Trade and Investment Partnership (or TTIP) – a “free trade agreement” between the US and the EU.

Rarely does one issue help galvanise continental wide disapproval but in the case of TTIP, people from across the political spectrum in every EU member state are worried about what TTIP will mean for public services and democracy.

And worried they should be.

The agreement – which could be signed off by the end of the year, will see trade and regulatory barriers removed allowing private companies easier access to public services such as our NHS.

Proponents have argued it is about stimulating economic growth, creating jobs and bringing in £12bn of investment.

But since trade barriers are practically non-existent between the EU and US, detractors have pointed out regulatory systems around the environment, food safety and workers’ rights will be severely undermined.

If that was not bad enough, the real agenda of the UK government in promoting TTIP is to open up lucrative public services to contracts and competition from transnational corporations.

Powers granted under the “Investor-Dispute settlement scheme” (IDSS) will allow private companies to sue national governments for loss of profits if public policy decisions are taken after TTIP is introduced.

So in other words – if a future British government decided to kick out private contractors and keep the NHS public, those private companies would be able to sue the government for future profit loss as a result of a public policy change.

Elevating transnational companies to the equivalent legal status of a sovereign nation state has huge implications for democracy which is perhaps why the government has been very coy about the negotiations.

For NHS campaigners, it is vital we keep the pressure on to make sure our most prized public service is exempt from TTIP along with the scrapping of the IDSS.

Popular campaigning by War on Want, the World Development movement and trade unions such as Unite, have even led UKIP to realise which way the wind is blowing and also join calls to scrap TTIP.

The momentum is very much with anti-TTIP campaigners and the need for mass action and peaceful civil disobedience to stop TTIP has never been greater.

Together we can keep the fat cat’s claws off our NHS.

John Millington is Keep Our NHS Public press and campaigns officer. He writes this in a personal capacity.

Details of demonstration in London can be found here

28 Responses to “Stop TTIP to save our NHS”