Existing problems with Universal credit risk being replicated unless you resolve them. 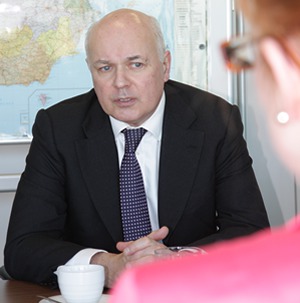 At your party conference you announced your intention to “accelerate the delivery of Universal Credit … from the New Year, bringing forward the national roll-out through 2015/16 to every community across Great Britain”.

As 985,920 fewer people receiving are Universal Credit than you originally said would be claiming the new benefit by April 2014, acceleration is clearly necessary.

However, given the litany of problems with the delivery of this scheme to date, and the £130m of public money wasted on IT, it would be extremely worrying if even the limited expansion of the scheme you have announced was being driven more by a political  timetable than by due concern for effective and efficient delivery.

Yesterday I visited the North West to find out first-hand how the Universal Credit pathfinders had been working in practice. I met with local authorities, the voluntary sector, housing providers and work programme contractors as well as staff and managers at the Jobcentre in Ashton-under-Lyne, which as you know has had the longest experience of handling Universal Credit claims. I would like to take this opportunity to record my gratitude and appreciation for the time they took to meet me and I am grateful also to you and officials at the DWP for helping to arrange this.

These meetings confirmed to me that the principle of Universal Credit is a good one that could bring real benefits to claimants, communities and taxpayers. It was also very clear that professionals across the public, private and voluntary sectors in these areas are working extremely hard to make Universal Credit a success.

However it was also clear that there remain a range of serious problems with the current operation of Universal Credit which risk being replicated and multiplied across the country on a far larger scale if Universal Credit unless they are resolved.

The serious problems that were raised with me included:

•         the IT systems and related work processes around Universal Credit claims remain “clunky”, poor at handling complex or dynamic circumstances, and prone to delays and mistakes in processing claims and making payments.

•         a significant level of system error which currently needs to be identified and corrected through costly manual checks.

•         particular problems and high rates of error associated with the incorporation of the housing costs element of Universal Credit.

•         concerns that claimants had not been informed of, or had difficulty in accessing, budgeting support, advance payments or alternative payment arrangements.

•        joint-working between the DWP and relevant local partners is patchy and there is poor data-sharing between the two, with little automatic integration of information on claimants and their circumstances.

The problems which I was told about during my visit are leading to concerns about the risks to claimants and additional costs to the public purse when Universal Credit is rolled out in other parts of the country. Therefore I am writing today to ask that you give us clarity and assurance on the following key issues:

1. What guarantee can you give that the IT systems for Universal Credit will not increase levels of error and delays in processing claims, payments and changes of circumstances?

2. What is your estimate of the current cost of manual processes for identifying and rectifying system errors, and how will you prevent this increasing as the caseload expands?

3. Will you publish a full evaluation of the impact of including new claims with a housing cost element in current Pathfinder areas before introducing Universal Credit to new areas?

4. Will you guarantee that all Universal Credit claimants will be fully informed of their options for budgeting support, advance payments and alternative payment arrangements, and set strict and published limits for the time taken to process and deliver on requests made?

5. What are the current levels of awareness and take up of options for budgeting support, advance payments and alternative payment arrangements among current claimants?

6. What increases in levels of rent arrears and related proceedings do you anticipate with the increasing incorporation of housing cost elements into the Universal Credit caseload?

7. How has “in work conditionality” been delivered in practice so far? What are the outcomes and lessons of its implementation so far? How will it be rolled out nationally?

8. What information on claimants and the circumstances and their partners is currently shared automatically between the DWP and relevant partners, and what can only be shared manually? What information cannot be provided even on request?

9. What steps will you take to ensure that joint working between the DWP and relevant partners is improved before introducing Universal Credit in new areas?

10. Will local authorities and voluntary sector partners in every area receive the same level of additional funding and support from the DWP for supporting the introduction of Universal Credit as has been available to Pathfinders? What has been the cost of this, and what will be the cost of extending it to all areas of the country?

And following your written ministerial statement of 13 October:

11. What IT system will underpin the full national roll-out, if, as you have stated, testing of the “enhanced digital service” is to start “later this year” in a “limited local area?

12. What exactly has been “assured by the Major Projects Authority and signed off by HM Treasury”, especially give the statement that “we will keep all longer-term plans under review.

13. When will a long-term plan for the full-implementation of Universal Credit be published?

15. By what date will universal credit be rolled out entirely across the country?

16. By what date will the migration of all legacy benefits have been completed?

I look forward to hearing from you.