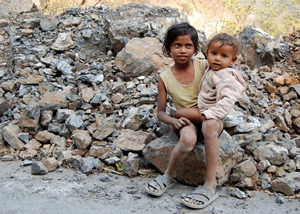 Take a guess at how much is lost to developing countries each year through international corruption? $1 billion, maybe $10? Even more?

The shocking truth is that $1trn a year leaves the world’s poorest countries through laundering, bribery, tax evasion and other forms of corruption. This figure is almost impossible to comprehend and earlier this month The ONE campaign launched a report  to highlight this incredible injustice.

If action is taken to end the secrecy that allows this scale of corruption and criminality to thrive the recovered revenues could help save 3.6 million lives if invested back into health systems where the need is greatest.

The uncomfortable truth is that much of the money involved is siphoned out of developing countries through companies and financial instruments in G20 countries.

The World Bank analysed the world’s biggest corruption scandals over that past two decades. Seventy per cent involved anonymous shell companies. The jurisdiction of choice was the British Virgin Islands.

This secrecy allowed the son of President Obiang of Equatorial Guinea to buy a mansion in Malibu, a private jet, Ferraris and Lamborghinis, even a jewel encrusted glove belonging to Michael Jackson – all through an anonymous shell company.

Back home, 80 per cent of the population of his country falls below the poverty line, a third die before the age of 40, and over half lack access to safe, clean water.

David Cameron led on this agenda  last year at the Lough Erne G8 summit. But his legacy on this issue depends on turning the UK’s leadership into a global standard of transparency. Without it, the money could just flow elsewhere.

The G20 is the forum to make this change. Last weekend, finance ministers from the world’s largest economies met in Australia to discuss tax reform and economic growth, but ignored the elephant in the room: the trillion dollar scandal. G20 leaders, when they meet in Brisbane in November have the opportunity to change the situation. Four low cost policies could shut down the secrecy that enables such criminality to flourish.

Action 1: Shine a light on phantom firms: Anonymous shell companies and trusts allow criminals to hide money, rip off governments and taxpayers and siphon off cash that could be used to pay for health care, education or vital infrastructure investment. Each G20 country should commit to making beneficial ownership information of companies, trusts and similar legal structures publicly available.

Action 2: Publish what you pay: One-third of the world’s poorest one billion people live in resource-rich countries; resources that have the potential to transform lives. Requiring oil, gas and mining firms to disclose information on revenues (a policy already adopted by the EU and US) would empower citizens to follow the money and ensure those funds to be invested in schools and hospitals.

Action 3: Crack down on tax evaders: ONE’s analysis reveals that $20 trillion of undeclared assets were held in offshore tax havens in 2013.

All G20 countries should agree to share information on bank accounts help by residents offshore. If developing countries had this information they could crack down on tax evasion and recover billions.

Action 4: Open up: publish government data: Financial data that tracks the money flowing in and out of government accounts is crucial for informing smart decision-making and public policy. All G20 countries should commit to making data open a standard practice.

These four actions add up to a powerful story of accountability, functioning open governments, and more prosperity for all.

For when citizens are empowered to make their own decisions and hold governments to account, and where criminals have no-where to hide, the world will be a safer and more prosperous place.