With pro-independence parties seeing record-breaking membership growth, the indy camp could be the real winners after all. 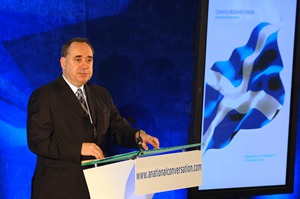 With pro-independence parties seeing record-breaking membership growth, the indy camp could be the real winners after all

Who do you think won the Scottish independence referendum on Thursday? You’d probably have a fair claim to say it was the unionist campaign, winning 55 per cent of the vote.

But a few facts suggest that in the long run, it could be the parties that campaigned for independence.

Why? Over the past three days, membership of the SNP has risen by at least 14,000, nearly half of which joined in the 24 hours after polls closed. To put that into perspective, that was the SNP’s total membership ten years ago. They’ve now added that since Thursday night.

This now makes the SNP by far the largest party in Scotland with over 45,000 members – far more than both UKIP and the Lib Dems’ total membership across the whole of the UK. It’s also, according to a Green Party activist I spoke to, nearly four times Labour’s membership in Scotland.

It’s hard to even accurately assess the extent to which people want to sign up: the SNP’s website crashed on Sunday for two hours when 500 tried to join in one hour. There were fascinating stories circulating on social media – such as an extended family of 18 people simultaneously resigning from Labour to join the Nationalists.

This has to be a total rarity in modern British politics at a time when membership of the mainstream parties is stagnant or plummeting. People are, whisper it, actually getting excited about politics.

It’s not just the SNP that is facing this surge either. 2,500 joined the Scottish Green Party between polls closing and Saturday evening – a faster rate than the SNP. Earlier this year the Greens had just 1,200 members in Scotland, meaning in a few days they have doubled or more in size. The impact? They could end up with over dozen MSPs in nine month’s time; their highest ever.

It’s hard to fathom the impact that could have on politics north of the border. The combined membership of the England & Wales and Scottish Green Parties is now around half that of the Lib Dems nationally. They’re gaining ground, a fact reflected in the polls, too.

Even the Scottish Socialist Party has seen a minor revival, with another 600 members in the two days following the referendum.

I could go on. But the key issue isn’t the numbers here – as impressive as they are – but the issue of why, and what impact this could have on Scottish politics.

Yes Scotland shared a Facebook status pointing to the astonishing recruitment figures (it was shared over 2,300 times). Of the more than 1000 comments, almost all were from new activists. And many are deeply interesting.

One of the most popular comments appears to sum up the mood:

“I will not lie down and accept this result. I will not suck it up, and move on. Nobody achieved anything in life by rolling over and accepting the status quo. I will continue to hope for an independent Scotland in my lifetime. I’ve never really taken an interest in politics before this referendum, but today I’ve become one of the 4000+ people to join the SNP in the last 24 hours. We are the 45 per cent and we will not be silenced.”

“We lost the battle but were not losing the war.” Again: “Yesterday we cried, today we move forward with renewed determination to claim what is rightfully ours.”

All these reflect the fact that the referendum was not the end of the road, but perhaps the start of a process. Many were disgruntled with the BBC and the rest of the almost entirely unionist press, 70,000-strong allegations – however ridiculous – of vote rigging, and the apparent reneging on promises to grant further devolution just one day after the referendum.

But they were also impressed by the principled move of Salmond to stand down upon losing the vote, and the vibrant radical grassroots campaign which mobilised working-class people who had long been ignored by neoliberal politics.

Those activists are now becoming party political: “Now that there’s no referendum campaign to be involved in, these people, who have been politicised for the first time in many cases, are looking for some political activity to get involved in – they’re not going back to their sofas,” Edinburgh Greens’ membership secretary Mike Williamson told me.

They also, crucially, have experience of campaigning that will help them in next year’s election. Paper members they shall not be.

The vast reawakening of the democratic spirit in Scotland on the Yes side in the months running up to the #indyref suggests it is a political resurgence that will not go away quietly. We can laugh at the rhetoric of ‘We are the 45 per cent’ [the total Yes vote] – but the major party leaders may not be laughing come next year’s elections. Johann Lamont’s own constituency voted overwhelmingly for yes, after all.

With pro-independence parties all seeing record-breaking membership growth (and thus resource growth – finances and feet on the ground), it looks like the indy camp may be the real winners after all.

10 Responses to “The Yes campaign may have won the #indyref”