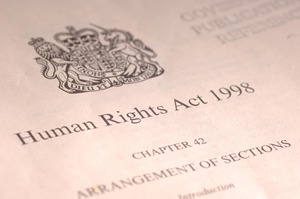 Following recent public sector strikes, David Cameron said new anti-strike laws would be a commitment in the next Tory manifesto. He wants to make the ballot threshold for holding a strike so high it would be nearly impossible.

The Tories have also recently indicated they want to pave the way for Britain’s expulsion from the European Convention on Human Rights (ECHR). This is in addition to their existing commitment to repeal the Human Rights Act (HRA).

Though it may not be immediately obvious, these commitments are very strongly connected. The Tories want to pull Britain out of the ECHR because they know it guarantees the right to take industrial action. So long as we’re signed up to it, the government can’t make it impossible for working people to go on strike in this country.

And it’s not just about going on strike. The ECHR’s protections extend to all sorts of challenges faced by workers.

For example, in a famous case a few years back, the Daily Mail used cash incentives to encourage its employees to surrender their trade union rights and representation. A sub-editor at the Mail and a loyal National Union of Journalists (NUJ) member, Dave Wilson, refused to exchange his union rights for a pay-rise and was subsequently declined an increase in wages.

But the ECHR protects against discrimination on the grounds of union membership. In fact, recognising that such discrimination threatens the very existence of trade unions and undermines the ability of workers to collectively bargain with their employers, the European Court of Human Rights intervened to stop the Daily Mail.

The journalists’ rights were protected by the Court’s ruling, but had Britain not been a signatory to the ECHR the paper would have got away with it.

There are other even more extreme examples. After two and a half years of forced labour, Patience Asuquo escaped her role as a domestic servant for a family in London. Her employers withheld her passport and threatened her with violence. Despite having reported the matter to the police, they failed to carry out a proper investigation.

Only when Liberty brought legal proceedings under the HRA did Patience’s case achieve the attention it needed. The employer was subsequently arrested and charged. The case would never have reached the courtroom if it weren’t for the Human Rights Act forcing police to reopen the investigation.

Unlike the Tories who constantly attempt to denounce the HRA and the ECHR, Labour proudly defends human rights. This week Ed Miliband and Sadiq Khan have given their backing to the Our Human Rights campaign from the Labour Campaign for Human Rights (LCHR).

The campaign shows how workers, alongside other groups, benefit from human rights in their every-day lives. From tackling discrimination in the workplace and defending the right to bargain collectively, to stopping forced labour, human rights play a crucial role.

The Tories have already assaulted workers’ rights beyond belief. I would encourage everyone to take a look at LCHR’s campaign and get involved. It’s vital that we maintain the last line of defence against Tory plans to further strip away workers’ rights.

Andrew Noakes is Chair of the Labour Campaign for Human Rights