The tendency to see EU policy as a battle between competing nations should be more problematic for the left. 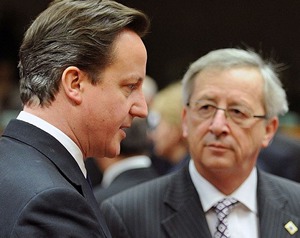 This week the former Conservative leader in the House of Lords, Lord Hill, was awarded the financial services portfolio at the European Commission – though anyone hearing of this development through the UK media might understandably have mistaken the news for the second coming of King Arthur.

Even newspapers that normally cover European issues with a measure of balance reinforced the narrative of the gallant peer riding in to rescue the poor benighted Brits from the willful oppression of the vindictive Eurocrats.

The Independent claimed that ‘hopes of winning a better deal in Europe for Britain were boosted’. The Guardian said that ‘Britain was celebrating a rare success in Brussels.’ Less restrained outlets conjured up images of Hill entering the Commission building in a chariot pulled by bulldogs, at the head of a conga singing ‘Vindaloo.’

This tendency to see EU policy as a battle between competing nations is a weird and problematic aspect of public debate on Europe. It is akin to thinking that because Michael Fallon, for example, is the MP for Sevenoaks in Kent, that town will be particularly safe from invasion as a result of his promotion to defence secretary in this year’s UK cabinet reshuffle.

That is no more absurd than the implication that the entire UK population will benefit unanimously from Hill’s work at the European Commission (and that all 60 million of us would suffer if the key post had been awarded to a Frenchman).

In fact, Hill is a former corporate lobbyist with links to and sympathies with big business and the financial services sector. His brief to protect banks and bankers from further EU regulation has been widely reported.

Conversely, Michel Barnier, the former French foreign minister and outgoing commissioner for the Internal Market, had helped to implement the EU-wide cap on bankers bonuses and this week warned that he was ready to clamp down on ‘allowances’ paid to top bankers designed to circumvent the cap.

Barnier has also proposed plans to make major corporations publish the pay ratio between their highest paid employee and the average and has promoted a ‘Robin Hood Tax’ on financial transactions to discourage reckless speculation.

The fact that Hill will now oppose these types of measures from a position of great influence supposedly represents a positive outcome.

Certainly, it should work well for the handful of people working in the banking industry who engage in high-frequency trading or receive a six-figure bonus more than twice the size of their annual salary. The extent to which the wider public benefit from these activities is debatable.

Maybe more effective regulation of bankers and the City of London might actually make the UK a fairer, happier, more prosperous and stable country. Certainly, most people support measures that would reduce the gap between the super-rich and low and middle-income earners.

Top economists are much less likely to oppose stronger controls of the bankers who wrecked the economy as harmful to the UK’s prosperity than the self-interested bankers themselves. Honest industry figures such as Robert Pickering, former head of the Cazenove investment firm, admit that the sky would not fall in or rivers boil over if the EU forces banks to resist their employees excessive pay demands.

These examples of recent EU proposals show how, working together with other European countries, we can regulate an international economy in a way that will make the UK a better place to live.

That is the true test of success for Britain in Europe, not the placement of our politicians in key positions on the European Commission or the influence wielded by vested British interests such as banking or big business.

13 Responses to “Is Lord Hill’s appointment really a ‘victory for Britain’?”