Voters would be more likely to vote for a party that promotes public ownership by a ratio of 4:1. 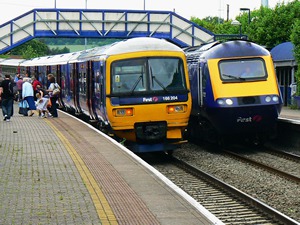 Voters would be more likely to vote for a party that promotes public ownership by a ratio of 4:1

Some years ago, I was involved with a rail user group in Bristol, called Friends of Suburban Bristol Railways. We were part of a community which desperately needed a more frequent train service. The local trains went every hour and a half – if you missed it, it was a very long wait for the next one.

We ran a campaign, handed out postcards to passengers and in the end, made the council pay for an extra train for the local line – passenger numbers increased by 100 per cent.

So I know quite a lot about what it feels like to be on the receiving end of politicians who think of us as the ‘community’. The council tried to bamboozle us with technicalities, saying that what we wanted wasn’t possible. They wanted us to focus on getting nice flower pots to make the stations look nice, not ask for a more frequent service.

When Labour says it wants democratic public services, is it really just interested in the flower pots? Or does it actually want to hand over power and do what people want?

We Own It launched last year to be a voice for the huge constituency of people who want public ownership of public services. For energy that’s 68 per cent of the UK population, for railways 66 per cent, Royal Mail 67 per cent, NHS 84 per cent, water 71 per cent. Who is representing this majority opinion that vital public services should be in public hands? And why isn’t it Labour?

Our polling shows voters would be more likely to vote for a party that promotes public ownership, by a ratio of 4:1. Sixty Nine per cent of Labour voters believe the public sector is more accountable than the private sector when running public services.

Public ownership isn’t a one size fits all model. In Paris, it means water is municipally owned by the city and run for the benefit of its people. In the US, a quarter of the energy supply is provided by cooperatives and publicly owned bodies.

Back here in the UK, the East Coast line provides an excellent service and makes millions in profit for the Treasury at the same time. Many local authorities are bringing services in-house to improve quality and reduce cost.

Despite this, we’ve seen the undemocratic selling off of all the public services that were left to sell: Royal Mail, children’s services, blood plasma, search and rescue helicopters. We’ve also seen public services handed to companies like G4S and Serco.

When people think of companies like these, the first words that come to mind include ‘rubbish’, ‘dodgy’ ‘corrupt’ and ‘shambles’. It’s hardly surprising that after the Olympics, the tagging fraud and many other scandals, only 21 per cent of the public trusts outsourcing companies. People really are ‘sick of Serco’ (and the rest).

We Own It is calling for all parties to commit to a Public Service Users Bill, so that the people affected by outsourcing and privatisation get a say. The New Economics Foundation and the Social Economy Alliance have expressed their support. Labour says it is interested in democracy – so this Bill is a great starting point, for three reasons:

Firstly, transparency. Sadiq Khan has already promised FOI for private companies running public services, but Labour needs to go further. We should have a right to see outsourcing contracts and financial and performance data of companies running our services.

Companies can talk about commercial confidentiality but if you’re getting public money, transparency ought to be part of the deal. The Public Accounts Committee and the CBI are both agreed that more transparency is needed.

Secondly, accountability. The current processes of privatisation and outsourcing are old-fashioned, archaic, closed box processes where the people who are most affected by the decisions being made have no say whatsoever.

The public rejects default privatisation by 10:1. Four out of five people want to have a say over whether public services are privatised or outsourced in the first place – this Bill would mean proper consultation about these decisions. Jon Trickett has already committed to our proposal that the public should have the right to recall a company that does a bad job.

Thirdly, putting people first. It really does matter who delivers public services and Labour should be brave enough to say so. The public sector, cooperatives, genuine mutuals, charities, social enterprises are better incentivised to deliver care because they don’t have a conflict between taking the time to look after people and making a profit.

Our Bill would prioritise public ownership, require in-house bids and promote organisations that prioritise social value instead of profit-making multinationals. Chi Onwurah wants the public sector and organisations with a social purpose to win more contracts under Labour – that’s a start but it’s not enough.

Of course, the Bill is just a first step. The party must go much further – a public NHS yes, but also a public railway, local cooperatives running energy, municipal ownership of water.

Democracy is supposed to be exciting. And it won’t be exciting if Labour doesn’t tackle these big issues that people care about. People want real democracy, they want a real say, and they want public ownership.

Privatisation is a disaster, like the sinking ship of the Titanic, and we’re all going down with it. If it’s not too much of a mixed metaphor, will Labour do more than rearrange the flower pots on the deck?

Cat Hobbs is the director of We Own It, an independent campaign for public service users. This blog is an extract from a speech given at Labour party conference. You can sign the petition for public services for people not profit here