It was right to oppose Israeli brutality in Gaza, but now it's right to support the use of force by the US in Northern Iraq. 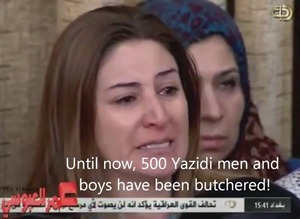 “Today I authorized two operations in Iraq — targeted airstrikes to protect our American personnel, and a humanitarian effort to help save thousands of Iraqi civilians who are trapped on a mountain without food and water and facing almost certain death.”

Meanwhile this morning PM David Cameron has made a statement in support of the action but has ruled out British military involvement in Iraq:

“…I fully agree with the President that we should stand up for the values we believe in – the right to freedom and dignity, whatever your religious beliefs.”

However a Downing Street spokeswoman added that the UK was “not planning a military intervention”.

The plight of the Yazidi community in Iraq is finally being taken seriously. More importantly, ISIS, the Islamist rabble that have taken over swathes of Syria and Iraq, are at last being seen for the civilisational threat that they are.

The left must in this instance put aside its reflex opposition to US military action (as a majority did over Rwanda and Kosovo) and try to ensure that Iraqis and Kurds are not left high and dry by Western governments out of sheer electoral expediency.

As seems quite clear, there is very little public appetite, both in the US as well as in the UK, for military involvement overseas. As such President Obama has ruled out the use of ground force against ISIS using the insular argument that ISIS are a problem for the Iraqis to sort out by themselves.

Yet the plight of the Yazidi should draw attention to the fact that, over the past 20 years, ‘keeping out’ has had consequences no less egregious than ‘going in’. For every Iraq and Afghanistan there has been a Srebrenica, a Rwanda and, more recently, a Ghouta.

Indeed, as many warned last year when the US and UK governments decided not to intervene militarily in Syria, there may come a point when an overspill of the Syrian civil war makes minding our own business impossible, just as the 9/11 attacks made a confrontation with the Taliban inevitable.

ISIS are probably best described as clerical fascists, and as the old left-wing slogan used to have it, fascism is war. In other words, and just as with European fascism during the previous century, there is no sitting on the fence on this one: when fascistic ideology is involved the war will invariably come to you.

The situation is such that the West either now helps the Kurds to hold ISIS (at the very least) or acquiesces in genocide – something that would offend any concept of international human rights.

As Sofia Patel has documented, there are around 500,000 Yazidisin living in northern Iraq along the Syrian border. The recent collapse of the Peshmerga defense (Kurdish defense forces) on Sunday means that both areas are now under IS control. 500 Yazidis have already been killed and ISIS forces are calling for the entire Yezidi people to be wiped out.

This is why President Obama has authorised air strikes as well as humanitarian assistance to those Yazidis currently stranded without food or water on Mount Sinjar, where they have fled to escape rampaging ISIS fighters.

Instead of dwelling on the rights or wrongs (mostly wrongs) of the 2003 invasion of Iraq, those who are usually so keen to ‘prove’ that ISIS are somehow a result of Western policy need now to decide how they want to deal with ISIS.

This means doing one of two things: either passively accepting what looks to be an imminent genocide and papering over any discomfort with unworldy pacifist slogans; or it means accepting the necessity of air strikes and persuading a reluctant electorate that international solidarity (in the form of decisive military force) is not simply another empty slogan.

We may live in another ‘low dishonest decade’, as W.H Auden called the 1930s, but if human rights are to mean anything there can be no sitting on the fence when it comes to the protection of the Yazidis in Northern Iraq. The question is not, ‘Will we end up in a quagmire/spend too much money aiding the Kurds and Yazidis?’ The question is, ‘do we put so little value on human life that we are willing to frivolously sit back and watch fascist forces exterminate it?’

Anti-fascism isn’t a purely negative idea that you can be vaguely ‘for’ without being in favour of any definite policy. If you say you are opposed to fascism then at some point you have to be prepared to fight it, rather than relying on other people in other parts of the world to do the fighting for you. Kurdish forces in Northern Iraq are being pushed back; now they need Western help.

It was right to oppose Israeli brutality in Gaza, but now it’s right to support the use of force by the US in Northern Iraq – even if you do find yourself on the same side as David Cameron. But then, if you really think that is the most important issue here you probably ought to reassess your priorities.

The challenge for progressives isn’t to ‘stop the war’ in Iraq – the war is happening whether we like it or not. The challenge is to make sure that war-weary electorates do not turn their backs on the people of Iraq as they have largely done with the people of Syria. The problem of ISIS won’t simply go away if we close our eyes to it.

56 Responses to “Why US air strikes on ISIS are right, and why the left should support them”