Will British Jews be forever held hostage to the Israel/Palestine conflict? 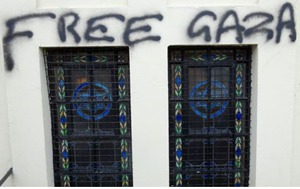 Will British Jews be forever held hostage to the Israel/Palestine conflict?

CST is a Jewish charity that works throughout British Jewish communities, providing security and third-party reporting of antisemitism to police and government. This last month, July 2014, we have had over 200 antisemitic hate incidents reported to us from across the country.

It is the second worst month since our records began in 1984.

The figure of 200 is an absolute minimum, due to our backlog of reports that still need to be properly analysed and categorised.

It is less than the 289 incidents recorded in January 2009, during and after the last large-scale war between Israel and Hamas, but is three or four times higher than what would happen in a routine month (for example, CST recorded 304 antisemitic incidents from January to June 2014 and 529 for all of last year).

In dry criminological terms, this is a ‘spike’, caused by a ‘trigger event’. The problem for Jewish communities in Britain and around the world is the sheer number of such trigger events since the year 2000, when the second Intifada began, followed by Israel’s wars with Hizbollah (2006) and Hamas (2009, 2012, 2014).

The 9/11 attacks and the invasions of Afghanistan and Iraq also caused spikes in antisemitic incident levels. Israel was not involved in those events, but they still appealed to the antisemites’ imagination.

The trigger event-spike dynamic is easily understood when compared to anti-Muslim hatred in the wake of 9/11, 7/7 and the murder of Lee Rigby. In each of these cases, anti-racists urged the media to be responsible in its reportage and language.

The link between media coverage, demonstrations and street violence was readily acknowledged. These things all serve to excite racists and the same principle applies for antisemitism.

Reporting rates and mechanisms change over time, but it is fair to say that the succession of triggers and spikes have left Jewish communities across Western Europe suffering about twice as many antisemitic incidents as they did in the 1990s.

Whatever the figure, it is a significant step change. For many, this is paraphrased as ‘the new antisemitism’, which usefully captures the essence of it being a new wave of antisemitism that is now so grave that it has caused thousands of French Jews to move to Israel, London and North America in recent years.

In Holland, the Chief Rabbi says he would leave were it not for his mission there (this, after the fifth attack on his home). Belgium is also a matter of increasing concern, especially after the Jihadist terror attack upon the Brussels Jewish Museum.

In some countries, especially France, Belgium, Holland and Sweden, this ‘new antisemitism’ also denotes ‘new’ perpetrators of European antisemitism: namely European Muslims. In Britain, the situation is slightly less clear cut, but largely similar during the months when the worst outbreaks occur.

The hatred is showing clear trends. Shouting ‘Free Gaza’ on a pro-Palestinian demonstration is not antisemitic: but obviously is when yelled at a random Jew in the street, or when daubed on a synagogue wall.  The same goes for screams of ‘child murderer’, shouted at Jews or pinned on a synagogue.

One need not be Jewish or a Zionist (in the true basic sense of the word) to suspect that no other country on earth appears to evoke such passion and hatred as Israel does. We need not cite Syria right now, nor Sri Lanka in 2009, because Britain itself has killed civilians in the Middle East in recent years, children included.

Yet it is only one section of British society that is called ‘child-murderers’, or ‘Nazis’, or is told that Hitler should have wiped them all out.

The Nazi slanders and threats are not in mainstream spaces, but the question ‘why didn’t Jews/Israel learn the lessons of the Holocaust?’ has been. This is surely repellent to the overwhelming majority of Jews. It comes posed as a question, but really it is a demand.

Whatever its motivation, it reeks of Jew-Israel-Nazi equivalence and ‘we are holier than thou’.

Even if this latest round of Middle East violence has (please God) now ended and the surge of antisemitism subsides as it should, July 2014 has shown, as did January 2009, the opinions, prejudices and hatreds that bubble away beneath the surface, building pressure until their next release.

Are British Jews, and those elsewhere, to be forever held hostage to a seemingly intractable conflict in which Jihadists are sworn to destroy Israel at whatever cost? In Gaza fanatics boast ‘We love death, they love life‘. In Europe, we have once again heard demonstrators chant ‘Hamas, Hamas, Jews to the gas!’.

Jews did indeed learn many lessons from the Holocaust, one being the need for a Jewish state, and two being an understanding that totalitarians mean what they say and say what they mean. It leaves Jews truly despairing of two pictures: those on our TV screens about the death toll in Gaza, and the wider picture, showing how attacks upon Israel and upon Jews knit together on the global stage.

Then, when the Jewish Film Festival is given a ‘ditch your Israeli Embassy link’ ultimatum by the Tricycle Theatre in Kilburn, it betrays how British Jews’ connections to Israel are the measure by which others judge them. The same applies to the National Union of Students decision to boycott Israel, which promises no end of trouble and intimidation for Jewish students.

Perhaps worse still, there are the mass intimidations of supermarkets that dare to sell Israeli goods, some of which have actually been forced to briefly stop trading as a result.

Finally, two antisemitic incidents out of over two hundred, giving the merest hint of recent events. They both tell you what is being demanded of British Jews and the consequences if they fail to comply:

– Street in Bradford, evening of 26 July. A Jewish couple became caught in slow moving traffic due to an accident up the road. Every car in the queue was being stopped by a group of apparently Muslim men and women, carrying buckets and asking for money for Gaza. The Jewish man politely declined, whereupon “you f**king Jewish bastard!” was shouted at him. Then, another man used a loudhailer to also shout “you f**king Jewish bastard!” at him. Next, “Jewish bastard coming down the road!” was shouted down the street to alert each of the other collectors. 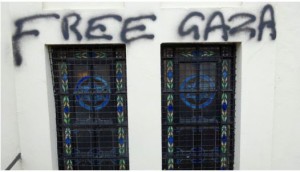 33 Responses to “In Europe, antisemitism is still bubbling away beneath the surface”