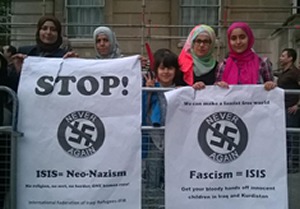 On Saturday the 16 of August, a large demonstration will take place in central London calling for urgent action to protect the people of Sinjar and the surrounding region from attacks by the group Islamic State in Iraq and Syria (ISIS).

ISIS represent a new and unprecedented threat to the lives and way of life of millions of people in Iraq and Syria. Furthermore, this is a threat we in the West cannot afford to ignore since it could potentially jeopardise our own national security.

The demonstrators will be calling on the UK government to make more effort in assisting the Yezidi people and put diplomatic pressure on states such as Turkey and Qatar for their policy of supporting jihadism in the region.

ISIS linked terrorists are carrying out a wholesale massacre against the Kurdish people and other ethnic and religious groups including members of the Shia, Sufi, Christian and Yezidi communities.

In the meantime, thousands of Yezidi Kurds are still stranded in the Jabal Mountains area of Sengal and with temperatures of up to 40 degrees Celsius during the day, the civilians are suffering from thirst and hunger whilst living under the constant threat of extermination.

We at Quilliam believe such a demonstration is vital at this critical juncture because, unopposed, ISIS will continue to take territory, kill innocent civilians, take women as slaves and create conditions in which many children will die of starvation.

“I hope as many people as possible turn up in order to express the outrage we all feel towards ISIS and their barbaric actions. I also hope our government does all it can to support the victims of ISIS as well as those on the ground who are fighting against them.”

14 Responses to “Demonstration against ISIS this Saturday”