In assuming the public simply likes Boris because they find him ‘funny’, critics misunderstand his appeal. 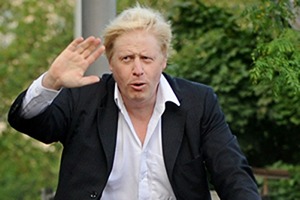 In assuming the public simply likes Boris because they find him ‘funny’, critics misunderstand his appeal

Boris Johnson has admitted what most of us already suspected: he is looking around for a suitable seat in order to enter Parliament after next year’s General Election.

Speaking earlier today, Johnson said he would “in all probability” try to become an MP at the next election:

“I can’t endlessly go on dodging these questions.”

“So let me put it this way. I haven’t got any particular seat lined up but I do think in all probability I will try to find somewhere to stand in 2015.”

No doubt this will delight many Tory activists. Boris is a firm favourite of the Conservative Party grassroots; but he also has a ‘star quality’ that reaches well beyond Westminster: a poll last year by Lord Ashcroft found that Johnson was the most likeable politician in the country.

Johnson is also rather untested when it comes to facing down those within his own party. Tory activists may swoon over him now, but will they be so keen if the Mayor starts pushing for an amnesty for illegal immigrants and extolling the virtues of immigration from the House of Commons? I doubt it somehow.

There is of course the possibility that Boris will change his  tune once he enters the Commons. Don’t bet against it, either. It’s easy for the Mayor to pose as the open-minded liberal when his voters are open-minded Londoners, but with an eye on the Tory leadership (why else would he choose to enter the Commons now?) there will be a great deal of pressure on him to assuage the fears of those Tories who are tempted by UKIP.

Paradoxically, though, he will be more dangerous for Labour if Boris doesn’t go down this road, despite the recent illusionary surge of Farage and his party.

Indeed, it’s a mistake to view Boris as a no-content Conservative. He believes in capitalism red in tooth and claw, but he also shares the liberalism of the young when it comes to social issues. He is pro-immigration, ambivalent about gay marriage and called for a ‘rethink’ on drug policy long before it was fashionable to do so.

Johnson ‘gets’ young people in a way few politicians do. This goes some way to explaining his popularity among the young – no mean feat at a time when many young people have never even switched on to politics let alone switched off. As the Economist put it last year:

“The chaotic, colourful mayor of London, a rare politician who transcends his Tory identity by melding social and economic liberalism, appears to have Britain’s libertarian youth in the bag.”

Putting this down to Boris’s anti-politics ‘charisma’ is convenient, but it side-steps the fact that there is a growing audience for the Mayor’s liberal message.

Like Boris, young people predominantly favour a small state in both social and economic affairs. Despite continued strong support for the National Health Service, the 2012 British Social Attitudes survey showed a hardening of attitudes toward many traditional left-wing concerns. In 1991 over half (58 per cent) of Britons agreed that the government should spend more on benefits even if it resulted in higher taxes. Last year that figure was just 28 per cent.

More than half also believed people would ‘stand on their own two feet’ if benefits were less generous, while only 20 per cent disagreed. Going back to 1993 the responses were almost exactly the opposite.

On social issues the liberal trend was also clear. Again to quote the Economist:

“Polls show that the young are more relaxed than others about drugs, sex, alcohol, euthanasia and non-traditional family structures. They dislike immigration, but not as strongly as do their elders. And they are becoming ever more liberal. The BSA has tracked attitudes for three decades. It shows that the young are now far more tolerant of homosexuality, for example, than were previous generations at the same age.”

As I’ve written before, I don’t think this dooms the left, because this is the same economic liberalism that is failing those who appear to have embraced it. In Britain in 2013 young people are more likely to be unemployed, more likely to have accrued large debts and have less chance than previous generations of owning a home.

But in assuming the public simply likes Boris because they find him ‘funny’, critics misunderstand his appeal, and will likely be found wanting when the time comes to counter his alluring brand of liberalism with an alternative from the left. When it comes to the next generation of voters, Boris is streets ahead.

3 Responses to “Boris’s message is more popular than you think. The left must be ready for it”