Nationalism has many potential outcomes, but they are all based on a concern for ‘our people’ not ‘the people’. 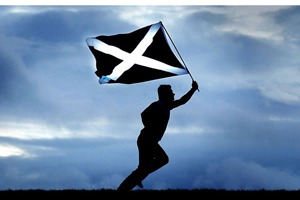 Nationalism has many potential outcomes, but they are all based on a concern for ‘our people’ not ‘the people’

Scottish nationalism, we are always told, is civic, tolerant and open, different to other nationalisms. So welcoming in fact that many signed up to independence will argue that it isn’t really nationalism at all.

From Billy Bragg’s distance it all looks very cuddly. Up close though, finding safety in numbers through a process of division, it looks a lot less pleasant.

A writer, Alan Bissett, prominent enough to be invited to perform to the conference of the governing nationalist party, describes current constitutional arrangements as ‘Subjugation; cultural, political and economic’. The acme of liberal independence supporting commentators, Gerry Hassan, expresses satisfaction that the Scots ‘are becoming a people’ and ‘developing voice in its deepest sense’.

It’s easy to recognise tropes here familiar from other, less favourably looked on nationalisms. Principally that only by asserting ourselves as a nation can we throw off alien influences and truly be ourselves. Perhaps then, Scotish nationalism isn’t all that exceptional after all.

Responding to JK Rowling’s endorsement of a No vote, a writer from the ‘National Collective’ declares Scotland is ‘a State of Mind’. Independence is all about ‘the story we choose to believe in’.

How very open, how very welcoming; anyone can be Scottish, provided they share our state of mind.

Except this, naturally, involves embracing independence. The status of those of us unwilling to do this isn’t quite spelled out. Neither is the corollary; if anyone can be Scottish by sharing ‘our’ state of mind. Also, what if, like myself, you don’t? If the ‘story you choose to believe in’ is a multi- or even non-national one, are you somehow less Scottish?

This is as much about exclusion as it is inclusion. And it is this process, more than independence that is developing momentum. Robin McAlpine, director of the Jimmy Reid Foundation and one of the gurus of the Radical Independence Campaign, used to describe non Indyfan lefties as ‘fellow travellers‘ for whom they should ‘keep a seat at the table’. He now issues dire warnings that ‘We are not afraid of you, we are going to win and history will remember you for how you behaved’.

Of course, all of the above matter much less than the SNP and the Scottish government. Recently, Nicola Sturgeon drew a distinction between ‘essentialist’ and ‘utilitarian’ nationalists. This isn’t anything to do with fundamental outlook, just a tactical difference about the timing of state formation. The deputy first minister went on to explain, in a phrase redolent of Michael Gove on steroids, that she wanted a new Scottish constitution to ’embody the values of the nation’.

What those values might be were (thankfully) left undefined. Add to this the vaguely sinister sounding intentions of education secretary Mike Russell that the views of scientists on research bodies ‘might be aligned’ with those of the Scottish government.

A more serious indicator of what might be in store was given when Ed Balls and George Osborne, invoking the national interest of the rest of the UK, said they didn’t support a currency union with an independent Scotland. They were immediately decried by the First Minister and his supporters as ‘bullies’ ganging up on Scotland.

In the howls of anguish that followed, it was taken as read that assertions by the UK couldn’t be valid in themselves, they were merely attacks on Scotland. The ‘Scottish’ interest wasn’t just deemed to be the most important or priority viewpoint, but the only legitimately held opinion.

The economics or even politics of the situation (eg If Balls or Osborne were interested in having a supranational banking arrangement deciding governmental borrowing limits, they would have joined the Euro) were abandoned in favour of the financially illiterate spasm of ‘It’s our pound too’.

Stripped to its essence, it was a case of the leader of a nationalist party building support for a policy by saying foreigners were attacking the country. If that looks like it has worked then don’t think it will stop on September 19. Nationalist ends won’t be willed in the referendum without embedding nationalist means to sustain them afterwards.

Clearly the SNP aren’t some sort of Jobbik style proto fascists. But suggesting that ‘Technocratic Administrative Boundary Adjustment’ or ‘Blood and Soil’ are the only two possible settings on the nationalist dial isn’t right either.

Nationalism has many potential outcomes, but they are all predicated on defining and separating, with concern for ‘our people’ not ‘the people’. Real progressive politics does the opposite. People at home or in the places that will shortly be abroad if there is a yes vote in September would do well to remember that.

268 Responses to “Up close, Scottish nationalism looks a lot like other nationalisms”