The Russian media, seemingly propped up by a rag-tag band of cyber conspiracy theorists, has been indulging some pretty bonkers stuff. 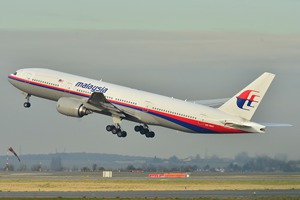 The Russian media, seemingly propped up by a rag-tag band of cyber conspiracy theorists, has been indulging some pretty bonkers stuff

To most people it seems pretty clear that the MH17 flight from Amsterdam to Kuala Lumpur was probably shot down by separatist forces in Ukraine, potentially with Russian involvement.

The same isn’t true, however, if you live in Russia – nor if you spend much time hanging around the dark fringes of the internet, where conspiracy theories are spreading at an impressive rate, even by online standards.

For Vladimir Putin, it’s all Ukraine’s fault – and Russian media, seemingly propped up by a rag-tag band of cyber conspiracy theorists, has been going full-steam to follow his advice in spreading this ‘objective’ picture.

With that in mind, here are the five worst conspiracy theories on the MH17 flight disaster that we’ve seen over the weekend:

1. The ‘it was meant to be Putin’s plane’ conspiracy

Russia Today (RT) has been propagating a completely anonymous story cited by the Moscow-based Interfax news agency, claiming that the Russian Presidential Plane “may have been the target of the attack” as Putin’s IL-96 flight crossed paths with MH17…over Warsaw. They cite an “anonymous source in the aviation industry”, though to add mystery (and arguably a lack of credibility) to the claim, the Presidential office refused to comment.

“The overall responsibility must lie with those who have created this war in Ukraine… I think there is a strong likelihood that the Ukrainian authorities did this,” says British ‘journalist’ Neil Clark, again over at RT. Despite hedging a few of his comments, every question during the interview was aimed at pointing the finger at the Ukrainian government instead of the separatist rebels.

Towards the end of the segment, Clark says something which sums up the tone of Russia Today’s coverage: “I wouldn’t travel on Malaysian airways, would you after this?’”.

It will be lost on those who do not follow the amusing world of numerologists and tin-foil hatters, but some are claiming that a secretive network of global elites linked with ‘the occult’ plotted the whole thing. Apparently the links to the number 7 – long associated with the Illuminati – prove that the disaster was part of a clandestine plot to launch a global war in order to initiate a ‘New World Order’. The evidence? MH17 was a Boeing 777 (lots of sevens there!) and made its first flight on July 17, 1997 – 17 years ago to the day. Well there you go.

Much of the Illuminati talk centres on the idea of a ‘false flag’, which involves making it look like an enemy did something in order to have an excuse to attack them. This relies on the notion that the West and the Ukrainian government want a massive nuclear war with Russia. 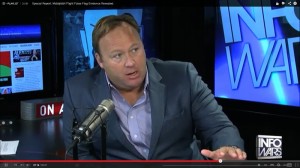 One popular site distributing this particular conspiracy theory is Info Wars. Asking why MH17 was flying over war-torn Ukraine, Info Wars David Knight claimed that the flight was asked by the air controller to fly at 32, 000 feet – lower than American flights which traditionally fly at 35,000 feet and therefore easier to shoot down. In reality 32,000 feet is fairly standard for European flights.

5. The ‘Israel did it’ conspiracy

Iranian state-controlled Press TV are ‘reporting’ the words of the (completely obscure) US Veterans Today editor James Henry Fetzer, which essentially argues that Israel probably caused the crash to distract from the war in Gaza. 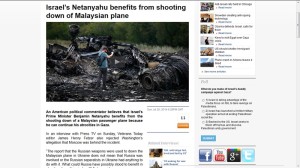 Because the world can’t deal with two news stories at the same time, clearly.

“Russia has nothing to gain from this. Israel’s Benjamin Netanyahu had everything to gain because it was occurring by remarkable coincidence at the very same time Israel is launching its massive inhumane savage slaughter of the Palestinian people in Gaza,” he writes.