Decent pay and conditions for working people didn't simply fall out of the sky. 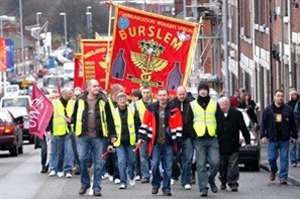 Reading some of the reporting on today’s strike action by public sector workers, you could easily believe that it was trade unionists who caused the worst financial crash since the Great Depression.

It wasn’t of course, but that’s not stopped the right making use of a good crisis to demonise trade unionists and paint unions as outdated and led by ‘dinosaurs’.

Conservative MPs often make the charge that the Labour Party is ‘bankrolled’ by the unions:

“More than half of Labour MPs have had their campaigns bankrolled (that word again) by the trade union threatening to disrupt the lives of millions and bring our economy to its knees,” was how Baroness Warsi scornfully phrased it earlier in this parliament.

Yet when people describe the Labour Party as ‘bankrolled’ by the unions they are actually saying that working people pay for the party – which is surely how you’d want politics to work under any system.

No, what the right are really doing when they attempt to play off the public against trade unionists is trying to turn the public on itself. After all, the ‘millions’ whose ‘lives are disrupted’ by strikes also presumably have jobs themselves – jobs with pay and conditions which have at some point been boosted by the existence of unions.

And that’s the nub of it: however fashionable it may be to decry the trade unions as relics and ‘dinosaurs’ of a bygone era, in reality a renaissance in trade unionism is long overdue. Economic growth may have returned but average wages have been falling for years now compared to inflation.

A common myth about trade unionism is that decent pay and conditions are won by bosses being kind rather than workers being rebellious. But history as well as extensive research contradicts this assumption. A recent study from Manchester University shows that countries with a stronger culture of collective bargaining tend on average to have higher minimum wages.

The widening gap between rich and poor in the past 30 years also reflects the loss of democratic restraint on those at the top. According to a YouGov poll from April, 56 per cent of people would like to see a more equal sharing of income – even if it reduced the total amount of Britain’s GDP.

In other words, millions of people – even many of those inconvenienced by today’s strike – want to see reduced inequality – and trade unions are one of the best ways of achieving that. As the graph demonstrates, countries with strong trade union movements tend to be more equal: 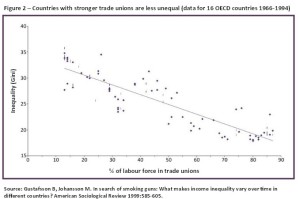 As for the government’s argument that we need a 50 per cent ballot threshold in order for any strike action to be legal: what’s telling is that the people most keen on this have nothing to say on increasing the methods available to unions to ballot members. In other words, they have no interest in making it easier for members to vote in strike ballots, they simply want to make it more difficult to take any kind of industrial action.

No one on the left should gloss over some of the trade unionism extremism of the 1970s. But we’re a long way away from that era now, and the pendulum has swung much too far the other way. Trade unionism today is almost a dirty word, with politicians of all stripes practiced in a sort of collective amnesia whereby decent pay and conditions for working people simply fell out of the sky or came as a result of kind-hearted rich men.

It is a fantasy, and those who decry today’s strike action as ‘politically motivated’ know very well what the real political motivation is in all the talk about ballot thresholds: to take yet more leverage away from working people.

125 Responses to “Strong unions won you your rights, not kind-hearted rich men”