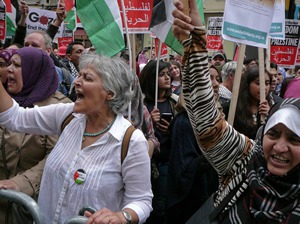 The demonstrations that have been glaringly absent from Britain’s streets during the Syrian civil war reappeared this weekend to protest against the latest round of fighting began between Israel and Hamas in Gaza.

The Stop The War Coalition, who months ago told the Guardian that protesting over Syria isn’t their job as they only focus on “what Britain and the US are doing”, made their usual exception for Israel by helping to organising Friday’s demonstration outside the Israeli Embassy in London.

As for Syria, STWC was only interested when it looked like Britain and the US might intervene military to stop President Assad using chemical weapons against his own people.

Their co-organisers included War on Want, whose website advertises just one past event for Syrian refugees in Lebanon and nothing about the situation in Syria itself; and the Campaign for Nuclear Disarmament, whose website contains nothing at all about Syria.

It is perfectly understandable that people who care about human rights and the suffering of others should care about Gaza. The images emerging from there in the past week would stir anyone who cares for the plight of civilians caught up in conflict. The question of whether or not Israel’s actions are justifiable or proportionate is not the subject of this article.

Rather, it is the contrast between the demonstrations against Israel and the lack of anything comparable over the brutal slaughter in Syria that justifies some pointed questions.

By current reports, over 160 people have been killed in Gaza during the current fighting. Sources differ over how many are civilians. As a comparison, according to the Violations Documentation Center in Syria, 2,207 people were killed by regime forces in Syria last month, of whom two-thirds were civilians. Estimates of the overall total of deaths in the Syrian civil war range from 115,000 to 170,000.

Comparing reactions to events in Gaza to the non-response to much worse events in Syria is not a case of ‘whataboutery’, because the Syrian conflict directly affect Palestinians; and in this respect the lack of solidarity is most glaring. By February 2014, over 2,000 Palestinians were reported to have died in the Syrian civil war, most of whom were killed in Palestinian refugee camps in the country.

Those campaigners who talk about a siege on Gaza should look at Yarmouk refugee camp in Damascus to see what a siege actually involves. Since July 2013, Yarmouk has been cut off by Syrian government forces. Barely any food or medicine has made it in. There are no goods trucks entering Yarmouk every day as Israeli trucks do in Gaza. In March 2014, Amnesty International identified 128 people who had starved to death in Yarmouk as a result.

Yet the Palestine Solidarity Campaign’s 2013 Annual Report makes no mention of Syria or of Yarmouk. PSC passed a resolution at its AGM in January 1014 deploring the situation in Yarmouk, but according to its website there have been no demonstrations outside the Syrian embassy, no letter writing campaigns, no mass lobbying of MPs on behalf of Palestinians in Syria.

It wasn’t always this way. In 1976 it was Palestinian refugee camps in Lebanon that were under siege from Syrian forces. Palestine News, a UK-based monthly newspaper that was politically aligned to Fatah and financially supported by the Arab League, planned to devote several pages of coverage to the fighting.

Its editor at the time, a young Liberal with a passion for Palestine called Louis Eaks, thought it prudent to warn the Syrian Ambassador in London, Adnan Omran, that the newspaper would be heavily critical of Syria’s conduct. Omran was outraged and threatened to withdraw the Arab League’s monthly stipend of £1,000 unless the edition was pulped. Eaks refused and published anyway: he lost his funding but kept his principles.

Nowadays in Eaks’ place we have the shameless George Galloway, who collects his pay check from Russia Today and presents programmes on Iran’s Press TV while both countries provide arms for Assad’s slaughter.

Galloway compounds his hypocrisy by using the platform given to him by the Holocaust deniers of Tehran to compare Gaza to the Warsaw Ghetto.

Then there is the grotesque situation of anti-Israel campaigners who misattribute victim photos from Syria in their haste to find gory images from Gaza to put on social media. Thus the Syrian dead are denied solidarity twice over.

The enthusiasm with which some people demonstrate about Israel while having no interest in doing the same for Syria makes it hard to believe that they are motivated by an objective concern for human rights. The lack of action over the fate of Palestinians in Syria suggests that the death and suffering of Palestinians per se is not enough to get people out on the streets.

It seems that if you are a Palestinian in Gaza whose safety is endangered by Israeli soldiers wielding American weapons, you are guaranteed the solidarity and support of the British anti-imperialist Left. But if you are a Palestinian (or anyone else) in Syria, under attack from Syrian government or Hizbollah troops armed by Russia and Iran, then you serve no purpose and consequently are of no interest.

Those protestors in London at the weekend presumably believe they were standing up for morality and basic humanity. In fact, all their selectivity demonstrates is just how easily those values can be abused.

54 Responses to “Outraged about Gaza? Fine. Now worry about Syria”