A Bristol-based computer firm has pulled out of George Osborne’s Help to Work scheme after a backlash from welfare campaigners on social media. 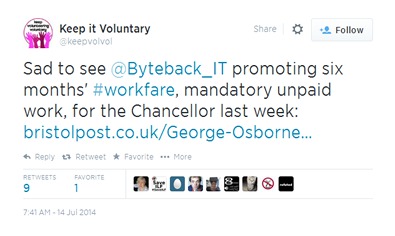 A Bristol-based computer firm has pulled out of George Osborne’s Help to Work scheme after a backlash from welfare campaigners on social media.

When activists discovered last week that Byteback, a computer repair company, was involved in the government’s workfare scheme, they descended to Twitter, Facebook and the blogosphere to express their outrage and ask the company to pull out – many giving them one star reviews on their page.

Yesterday, the company announced that they were indeed withdrawing from Osborne’s recently-launched pet project, saying they had been ‘ill-informed’. They told the blogger Jonnny Void “You’ve spoken, we’ve listened. From tomorrow, no more involvement ever with #workfare. Had the best of intentions, we were wrong.” 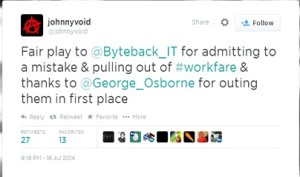 But they didn’t pull out without a fight. The company initially defended the decision to take part in the unpaid labour project – whereby firms take on staff without paying them while the ‘volunteers’ subsist on benefits, in what has been described as forced labour.

Byteback had said the workers were ‘employees of the state’ and therefore paying them wasn’t their responsibility. One Twitter commentator described this as ‘astonishing ignorance’.

Moreover, the company took to Twitter in the first week of the controversy to defend themselves – posts which have now been deleted on the protected account. However, it was only when George Osborne visited the office on the 10 July that the protests began, with hundreds of angry Facebook comments and tweets risking long-term reputational damage to the company.

Here’s the image that caused the controversy: 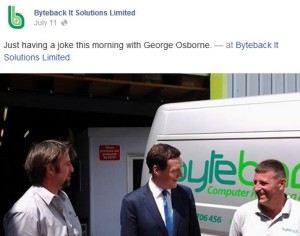 The move marks a victory for the Keep Volunteering Voluntary campaign, a coalition of over 400 charities and other organisations who oppose the government’s workfare scheme.

According to the Huffington Post, treasury figures called the campaign “outrageous” and said it constituted “unacceptable intimidation”.