In trashing the legacy of Tony Blair you are essentially sticking two fingers up at the electorate. 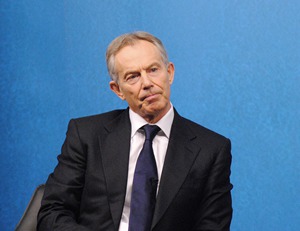 I think it’s rather optimistic to write, as Conor Pope did on Labour List yesterday, that Tony Blair’s latest speech was “his biggest endorsement yet of Ed Miliband’s leadership of the Labour Party”.

The speech certainly wasn’t hostile; I simply think ‘endorse’ is the wrong word. Blair is of the Labour party and will back the party whoever is leader. The real question is whether he thinks they’re doing the right thing, which is where yesterday’s speech was more mixed.

Judging by the speech, Blair certainly appears to accept that things have moved on from the New Labour years and that 2014 requires a different agenda to 1997. The centre ground has shifted and therefore Labour’s agenda should shift – so not that dissimilar to Ed Miliband’s position, actually.

The difference between the two is found in the degrees to which they believe the centre ground has moved. Blair appears less confident than Miliband that it has moved significantly – as much as the former recognises a change in the political weather, he also cautions against a belief that the public has “fallen back in love with the state”.

“In the end, parties can please themselves or please the people,” Blair warns, adding that “Old ideas in new clothing are still old ideas, and are visibly so when undressed by reality.”

And yet for a not insubstantial section of the Labour Party, anything which Tony Blair now says is almost certain to be drowned out by shrill cries of ‘illegal war’ and snide remarks about the former Labour leader’s ‘fortune’.

Not only has this replacement of thought with slogans become a rather tedious, but it’s also dangerous for Labour: dangerous because there are lessons for the left in the successes of New Labour as well as the failures, as should be obvious.

And despite the naysayers, there were successes.

We all know about Iraq yet we seem to have forgotten Kosovo and Sierra Leone – examples of humanitarian military interventions which worked and worked well. There’s also Blair’s work on the peace process in Northern Ireland, which was started by the Tories but made into something concrete and lasting by Labour.

PFI is lamented at least in part because people have now forgotten what it was like when schools lessons were taught in portacabins. Today the left champions the living wage forgetting that prior to Blair even the minimum wage was considered a left-wing pipe dream.

Workers’ rights also improved under Labour and shortly before the 2010 election the Equality Act was passed, which enshrined in law a public sector commitment to reducing the gap between the rich and poor.

No less importantly, New Labour also ensured that the left triumphed in the culture ‘war’.

When Labour came to office in 1997 the homophobic Section 28 was still on the statute books, preventing local authorities from ‘promoting homosexuality’. By the time Labour left office in 2010 the government of Gordon Brown was championing civil partnerships and had paved the way for David Cameron’s gay marriage bill.

Whatever you think of New Labour, this is not a record that can be crudely dismissed as ‘Thatcherism-lite’. The Blairite ‘third-way’ is also as much the consensus today in Miliband’s circle as it is Blair’s. There are certainly differences in emphasis, but no serious person in the Labour Party wants full state control of the economy. It didn’t work and the world moved on. In that respect at least, Miliband is a die-hard Blairite.

There is a startling statistic that those who wish to wipe the New Labour years from record ought to consider: it is now 40 years since a Labour leader (excluding Blair) last won a General Election. 40 years. Let that sink in for a minute. The last time an election was won by Labour-minus-Blair Leonid Brezhnev was leader of the Soviet Union and Richard Nixon was about to be impeached. That’s how long ago it was.

If we take anything from the Blair years (as I hope I’ve persuaded you that we should) it ought to be this: being radical means being in power, not sitting on the side-lines carping. Eschewing pragmatism in favour of ideological purity is a luxury afforded only to that class of people who are sheltered from the effects of Tory governments by a thick layer of money.

Russell Brand may enjoy telling people not to vote, but then he’s probably never had to rely on a Sure Start centre; and he definitely doesn’t have to rely on the existence of a minimum wage to make ends meet.

A desire to move on from the Tony Blair years is one thing, and is perfectly understandable. But to seek to completely trash Blair’s legacy is to essentially stick two fingers up at the electorate: it was they who voted New Labour into office in three successive elections, after all.

40 Responses to “Tony Blair was right about some things, however uncomfortable that makes you feel”