Lifting the pay cap would be beneficial for both the exchequer and the economy. 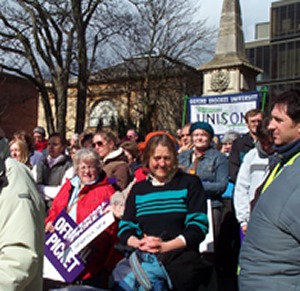 The argument that public sector pay rises are unaffordable has been seriously dented by a new report published yesterday. Howard Reed, the highly regarded former IFS economist who now runs Landman Economics, has written Lifting the cap: The economic impact of increasing public sector wages in the UK.

A compelling case for lifting the punitive 1 per cent public sector pay cap can be made on moral and pragmatic grounds. Workers in local government and schools went on strike on July 10 to pile further pressure on what is clearly an unsustainable policy.

But Reed’s report looks at the issue from the point of view of the government, and shows the impact of modest increases would be beneficial for both the exchequer and the economy.

For the first time, this research gives us a projection of the wider effect of each % point increase in public sector pay. It shows us that every 1 per cent increase “…generates between £710 million and £820 million for the government in increased income tax, National Insurance contributions, and expenditure tax receipts, and reduced benefit and tax credit expenditure”.

This reduces the net cost of a public sector pay increase to around £600 million, contrasting sharply with the up-front wage-bill increase of £1.4 billion. So the cost of lifting the cap would be roughly half the amount which is often assumed.

Or we could go further, as Howard Reed does, and look at the thorny issue of tax avoidance and evasion. HMRC suggest tax evasion in 2011-12 amounted to around £15 billion and avoidance to £4 billion. There are many much higher estimates of the tax gap. And yet vast amounts of political resources and capital is dedicated to holding down public sector pay, and relatively little to addressing the evasion and avoidance. This simply makes no sense.

It’s also clear from the report that the benefits of injecting public sector pay increases into the economy would have significant social as well as economic benefits. Each 1 per cent increase would pump between £470m and £880m of demand into the economy and generate between 10,000 and 18,000 full-time equivalent jobs, particularly for sectors such as leisure and transport.

So isn’t it time for our main political parties to get real about the issue of public sector pay? Quality public services need to be paid for. We cannot continue to exempt the wages of public sector staff from this cost simply because it fits with ideological prejudice or media hostility to public provision.

Demands for adequate public sector pay are not going to go away. The pay cap, which is planned to last until at least 2018, is not sustainable, equitable or just. If we look at this issue on its merits, reasonable people will now conclude that the pay cap has to end.