The fact that David Cameron recognises the unsuitability of Jean Claude Juncker doesn't make it any less true. 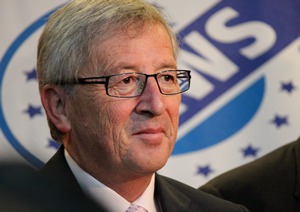 The impending anointment of Jean Claude Juncker to the presidency of the European Commission is supposed to be something of concern only to the right. Specifically, David Cameron and his restless backbenches.

It would be a mistake, however, to assume that concern for European democracy is the preserve of conservatives. Indeed, those who support the European project, as we do, ought to be the most vocal in their opposition to anything that remotely resembles a stitch up.

David Cameron may have lost the battle with Europe over Juncker, but on the point of principle he is correct: Juncker has no popular mandate to assume the European presidency. Below are just a few reasons why:

This shows up for what it is the claim that Juncker has a popular mandate simply because the voters in the recent European elections voted for the European People’s Party, whose candidate for the top job is Juncker. A popular mandate requires that people actually understand what it is they are voting for. Only one in 10 Europeans even know who Jean Claude Juncker is. This is not democracy; as David Cameron recognises.

Britain is also much more likely to leave the EU in the next parliament with Juncker as President of the Commission. This is why anti-European politicians are warming to the idea of a Juncker presidency. ‘More of the same’ is not palatable to most British people. It shouldn’t be tolerated by the left, either.

It isn’t right-wing to worry about this

Just because someone we don’t like thinks something that doesn’t automatically mean said person is wrong. This should be obvious, but often it needs saying. David Cameron is right about Jean Claude Juncker for the wrong reasons. The problem isn’t that Juncker wants an ‘ever closer union’, it’s that Juncker is being shoehorned into the top job via undemocratic means.

In reality things are a lot more complicated. For one thing it is a fantasy to pretend that the European Parliament is more democratic than the European Council, which is made up of elected heads of government. As the Economist puts it, voters “treat European elections as second-order national polls. In every single EU country, turnout is much higher in national elections…By insisting that it will block anybody other than Mr Juncker, the parliament is trying to deny the European Council its prerogative”.

Most EU leaders consider Juncker a poor choice for the Presidency. He has a reputation as an out of touch bureaucrat for a very good reason, and his only real political achievement to date has been to cling to power in a country that has built a reputation as the EU’s top tax haven. Juncker himself is even rumoured to prefer the job of President of the European Council. He’s the establishment conpromise, and progressives ought to be careful about rushing in to defend any status quo, let along the European one.