The total annual cost of the monarchy is estimated by Republic to be around £300m - nine times higher than the official figure. 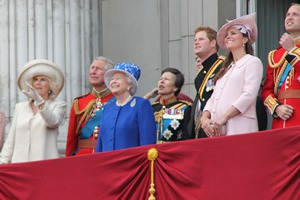 One of the more disreputable traditions associated with the monarchy is the annual farce of the royal finance report. This is when the royal household gets to report on its own spending of taxpayers’ money on its own terms – tightly managing the release of information and ensuring it’s carefully couched in so much spin real abuse of public money gets glossed over.

Yesterday was no exception as Sir Alan Reid, head apologist for royal spending, spun his way through a multi-million pound rip-off that included £4m spent by the head of state on her grandson’s new home and £16,000 spent by her son on a quick trip to Stoke.

All this was brushed aside – this is a ‘value-for-money-monarchy’, costing each person in the country 56p. The new home for Kate and William was, according to royal aides, ‘an ordinary family home’. It just happens to have more than twenty rooms and a full staff.

The total annual cost is claimed to be £36m, a sum neatly divided by every man, woman and child in the country to reach that magic figure of 56p per person. This spin itself is so disingenuous as to be a real challenge to proper financial scrutiny.

Setting aside the obvious point that not all 60m of us pay tax, dividing the total among all the people is no way to justify public expenditure. Anything can look cheap when you do that: MPs’ expenses only cost us £1.60 last year, so why all the fuss?

The problem is that taxpayers don’t pay into lots of individual pots of money. All our taxes go into the government’s coffers and the government is then expected to share that money out according to its priorities. It can choose whether to spend that £36m on the Queen or on hospitals, schools and policing.

The bigger problem with the official claim is that the £36m only covers the Sovereign Support Grant, a shabby set-up agreed by this government shortly after coming to power. Yesterday’s report ignores tens of millions of pounds of public money spent on or lost to the royals.

This includes over £20m spent by local authorities, £2m spent on Lords Lieutenants no-one has ever heard of, an estimated £102m security bill that includes protection for more than a dozen royals and offspring who can well afford their own protection and almost £90m lost from the Duchies of Lancaster and Cornwall, money that should be going into the treasury.

The total annual cost of the monarchy is estimated by Republic to be around £300m, nine times higher than the official figure. That’s the equivalent of 14,000 new NHS Nurses or newly qualified teachers.

The spending and the spin are the result of unique arrangements made for the palace and the deference shown to the royals by MPs that mean there’s barely any meaningful scrutiny or accountability.

Of course there can never be any real accountability with the royals because they can’t face the ultimate sanction of losing their jobs. But it seems the government and our MPs prefer not to even try to hold the royals to the same standards expected of other public bodies. Most MPs, that is. The Public Accounts Committee has made some attempt at demanding higher standards, but it is telling that the palace is able to ignore their recommendations with impunity.

MPs have in previous years called on the royals to cut costs, yet spending went up more than 5 per cent this year. They insisted the palaces be opened up all year for tourists, to raise the revenue needed for building maintenance – the royals refused.

MPs have also called for greater transparency in financial reporting, such as when, a couple of years ago, the PAC said: “The transparency of the Prince of Wales’ tax payments is limited by the fact that income tax and VAT are reported only as a combined total. These figures should be disclosed separately, so we can understand precisely how much, and at what rate, income tax is paid by the Prince.”

The report from the Duchy this year continues to combine all taxes into one line, giving the impression Charles is paying a higher amount of income tax than he actually is. And of course the Duchy still refuses to pay corporation tax.

The sovereign support grant is an extraordinary coup for the royals. Unlike any other public body its funding level is not set through a proper budgeting process, it isn’t calculated in terms of what the royals need. It is simply pegged at 15 per cent of revenue from the Crown Estate, a huge property portfolio that belongs to the nation and which is set to enjoy big increases in revenue over the next few years.

The beauty of the deal for the royals is that if Crown Estate revenue goes up their grant goes up, but if the revenue falls the grant doesn’t fall with it. It’s a win-win all the way to the bank. What’s more the manner in which the sovereign support grant is managed is completely at odds with normal practice.

In theory, the introduction of the sovereign support grant brought increased scrutiny of the royal finances. The national audit office (NAO) and the public accounts committee (PAC) are now responsible for ensuring the grant is spent wisely.

The problem is that the politicians don’t want to hold the royals to account, and the system is skewed heavily in favour of the royals (no doubt as a result of heavy lobbying by the royal household, lobbying beyond the reach of freedom of information laws).

So while the PAC was highly critical of royal spending in its first report on the grant, there is no sign that the government intends to enact its recommendations.

On the contrary, chancellor George Osborne accused the PAC of “meanness”. In any case, the NAO and PAC only oversee the spending of the sovereign grant – not the many millions of pounds in hidden costs.

At £300m a year and with millions being spent on personal travel, holidays and accommodation the royal household is openly and wantonly abusing public money – with the full consent of a government unwilling to apply basic standards of accountability to the head of state.

Graham Smith is the current chief executive officer of Republic

15 Responses to “The royal household is openly abusing public money”