It is one of the great myths of recent political history – that the Liberal Democrats were opposed to Britain joining with US forces to invade Iraq in 2003. 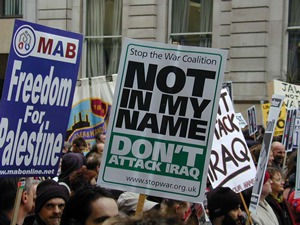 It is one of the great myths of recent political history – that the Liberal Democrats were opposed to Britain joining with US forces to invade Iraq in 2003.

It is quite simply not true. In the run up to the 2003 invasion, Liberal Democrat leader Charles Kennedy addressed the infamous anti-war rally in Hyde Park on February 15.

He told the million-odd people who had marched through central London (including this author as a 17-year-old student) he had “yet to be persuaded as to the case for war against Iraq”.

He also told the Stop the War coalition-led protest he was “not personally a pacifist”.
These statements show Mr Kennedy was open to the idea of military action in Iraq, and he set out four criteria for Lib Dem acquiescence in the invasion:

1. The United Nations has the moral authority and the political mandate here.

2. United Nations decisions have to be based on adequate information – which means full compliance with the weapons inspectors.

3. The British House of Commons must have the right to vote on any actions taken.

4. All other options must be exhausted before there is any recourse to force.”

He added: “Without a second UN resolution, there is no way that the Liberal Democrats could or should support war.”

So there it is: Charles Kennedy setting out the circumstances in which he and the Lib Dems would be in favour of a military invasion of Iraq.

Get the second UN resolution and we back you. 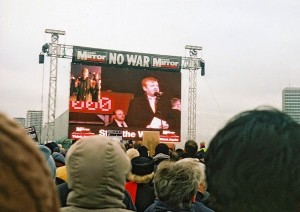 That is not: “We are opposed to any invasion of Iraq”.

It may seem like a small difference – after all, Blair and Bush did not get the second resolution, and the rest is very recent, and very bloody, history.

But there is a world of difference from being the ‘anti-war party’, to the ‘anti-war-in-certain-conditions-party.’

Remember, the Lib Dems were not opposed to sending soldiers into Iraq. They were just opposed to doing it without a second resolution.

But Lib Dems still like to paint themselves as leading the crusade against the war back in 2003.

So when Nick Clegg accuses Tony Blair of attempting to “airbrush” his role in creating the current situation in Iraq, keep in mind the Lib Dems are not adverse to indulging in a spot of “airbrushing” when they claim they were anti-war.

9 Responses to “Blair is not the only one with Iraq amnesia – the Lib Dems were NOT anti-invasion, just anti-that-kind-of-invasion”