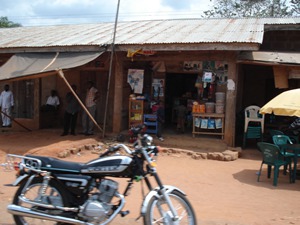 Boko Haram’s leader Abubakar Shekau said in a video released yesterday that the 276 girls the Nigerian Islamist extremist group kidnapped three weeks ago in Borno should not have been in school in the first place; they should have been married.

Motorcycles are a trademark mode of transport for Boko Haram

This might seem a strange announcement to come from a group affiliated with Al Qaeda, part of a transnational jihadist network normally known for spectacular bombings and the insistent call for a global Islamist state. However, a fierce disdain for education is central to this group’s ideology; indeed, ‘Boko Haram’ is Hausa (the majority language in Nigeria) for ‘Western education is sinful’.

With this as its foundation, it has aimed to create an Islamist state in northern Nigeria, pursuing three main strategies.

The first is formed of attacks on domestic and international targets to gain territory and pose a threat to foreigners; second, it conducts systematic attacks on non-Islamic schools, as part of an attempt to Islamise society; and third, it has launched waves of kidnapping to attract concessions from the Nigerian state in order to fund the group’s operations.

Last month’s kidnapping is as a combination of these three aspects.

Boko Haram has been connected with Al Qaeda in the Islamic Maghreb (AQIM) and the Movement for Oneness and Jihad in West Africa (MUJAO) in the Sahel, through its splinter organisation Ansaru. It has further international links through one of its leaders, Mamman Nur, who has key Al Qaeda contacts in AQIM, Al Shabab, and Al Qaeda core.

This international networking is crucial to Boko Haram’s ideology, which calls on the unoriginal blend of Ibn Taymiyya and Abdul Wahhab’s salafism, Qutb’s anti-Westernism, and Al Zarqawi’s brutal sectarianism. Their narratives follow a similarly international trend, with calls for revenge on the ‘crusaders and the United Nations’, retaliation against the French president’s ‘war on Islam’ in Mali, and support for Syrian jihadists against the ‘oppressor Bashar al-Assad.’

Its obsession with threatening education distinguishes Boko Haram from other salafi-jihadist organisations. Literalist interpretations of religious scripture continue to pose problems all around the world, but Boko Haram’s persistent focus on Western education in general, and girls’ education in particular, should trouble us as much as hudud punishments (such as amputation for theft and stoning for adultery) in Afghanistan or Brunei. The effects will be as long-lasting as amputations and continue to feed the misdirected ‘clash of civilisations’ paradigm so cherished by jihadists and the far-right alike.

By targeting education in its name and actions, Boko Haram threatens one of the greatest counter-extremism tools available. If successful in achieving its aims, this could ensure a steady flow of recruitment for years to come, for education presents the tools to find a way out of the socioeconomic malaise in northern Nigeria; education allows for the questioning of the narrow, extremist and morally bankrupt exploitation of Islamic scripture and modern history; education provides a connection to the world beyond your immediate environment, to broaden your horizons and to think critically.

This is what Malala’s story teaches us, and it is just as valid in Nigeria as in Pakistan.

Parallels between the Pakistani Taliban and Boko Haram abound. In the same way the Taliban targeted Malala, Boko Haram targeted Chibok Girls’ School because they pose an intellectual and symbolic threat to the group.

Boko Haram aims to monopolise northern Nigeria’s education system. By terrorising those considering a Western style of education, they pave the way for their own indoctrination of young people. Since 2012, we have seen the group’s systematic radicalisation of the illiterate and impoverished al-majirai boys who are dependent on Boko Haram for alms and shelter. In exchange, they end up with lessons in which they learn the Qur’an by rote and are fed Boko Haram’s narrow and aggressive worldview.

In this way, the targeting of education is both a strategy and a tactic for the Nigerian terrorist organisation.

However, an international effort to defend the right of young people to an education, as enshrined in Article 13 of the UN’s International Covenant on Economic, Social and Cultural Rights, is of utmost importance, not least because it would undermine Boko Haram’s modus operandi, act as an invaluable counter-extremism tool for generations to come, and reduce the recruitment pool for a group that will otherwise continue to haunt northern Nigeria.

5 Responses to “Who are Boko Haram?”