Rather than return power to the UK, leaving the EU would take power away from our politicians, businesses and our citizens. 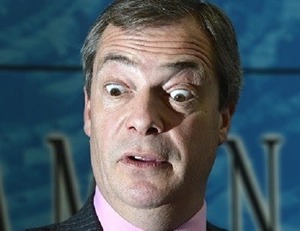 The selectivity of UKIP’s facts on Britain’s membership of the European Union and on immigration are well-known.

It is not enough to wrap ideology in unqualified numbers (such as the supposed £55m cost per day of our EU membership, which appears to be at odds with HMRC figures).

Here I compare the information Eurosceptics present with the reality of what would be at stake were UKIP to implement their ideas.

UKIP: ‘A vote for UKIP is a vote to leave the EU and recover power over our national life.’

Peace and stability is power enough.

Nigel Farage wants to take the UK out of the European Union, severing a bond with 27 of our European neighbours who have lived together in peace since the devastating world wars that dominated first half of the 20th century. On awarding the Nobel Peace Prize to the European Union in 2012, the Nobel committee chairman said: “the political framework in which the union is rooted is more important than ever”.

It is arguably the diplomacy, cooperation, friendship and respect enjoyed by members of the EU that have kept Europe peaceful for nearly 70 years. We need our leaders at the table, talking, negotiating and understanding each other. UKIP wants Britain to be on the sidelines, away from the mutual agreements and ambitions that bind 28 nations – out of the room and unable to represent Britain or help maintain peace and stability.

Under UKIP, while the representatives of 500 million of our European neighbours would be forging close alliances, Britain would be a remote island. What power would Britain gain in this regard?

Even so, we must consider what Britain would look like if UKIP were representing our interests with our European neighbours, whether or not we remained in the EU. Farage is not known for building relationships: one only has to remember his disgraceful treatment of Herman Van Rompuy on his election as European Council President.

If the EU has been responsible for peace in the last 70 years, it currently costs each person around £75 per year – the balance between what is paid and what is directly reinvested in Britain by the EU. This puts the ‘cost’ of our membership of the EU in a completely different light.

UKIP: ‘Regain control of our borders and of immigration – only possible by leaving the EU.’

The Office for National Statistics (ONS) recently published information that suggests UKIP’s one-way escalator at the White Cliffs of Dover on its election posters is unworthy of informed debate.

According to the ONS, 1.8m Britons live outside the UK in Europe, with 1m of these living in Spain, whilst 2.3m Europeans live in the UK. If Britain pulled up the drawbridge, it would be a certainty that other EU countries would respond and the British dream of living and working in France, Spain, Greece and Italy would be over.

The escalator is moving in both directions and UKIP would have it stopped altogether.

Leaving Europe not only puts at risk our ability to move freely across borders in Europe, it also risks the access to cheap flights that millions of us enjoy for work and pleasure. Small businesses rely on low cost flights to secure essential new opportunities for growth and millions of families and friends rely on this EU advantage to enjoy holidays in the sun.

Far from protecting our borders, leaving the EU would come at a great price and restrict us all in our work and leisure. Our borders would also keep more of us in.

UKIP: ‘Save £55m a day in membership fees by leaving the EU’

Farage’s claim that the EU costs the UK £20bn in membership fees per year is some £11bn higher than figures quoted by the EU Budget Office in 2011. In addition, the 2011 inward spend by the EU in Britain was around £5bn according to the EU Budget Office, which gave a net cost to the UK of £3.6bn for our membership. Whilst this is still an apparent cost, it is significantly different to UKIP’s figure.

Why should we accept a net cost? The EU says that there is a net benefit to the UK through access to European markets and contracts. HMRC and Customs Overseas Trade Statistics show British exports to the EU are valued at around £12bn per month – ie £144bn per year. The Centre for Economic and Business Research (CEBR) put this figure as high as £211bn and supporting 4.2m British jobs.

UKIP claims this level of trade and employment would be sustained if the UK pulled out of the EU, which is an important consideration that I would like the party to explain.

According to the Confederation of British Industry (CBI), our membership of the EU costs the equivalent of 0.4 per cent of our Gross Domestic Product (GDP) and returns a net benefit of 4-5 per cent of GDP. This tenfold return on investment is equivalent to £62bn to £78bn per year – roughly the combined economies of the North East and Northern Ireland. This could also equate to 1.3m jobs if the CEBR data is extrapolated.

Whilst the CBI has been challenged to back up its assertion with more evidence (its figures are based on literature studies), it is for Farage to demonstrate that UKIP’s policy would not put the UK’s economy in jeopardy.

The effect of UKIP’s flagship policy on British business

UKIP wants a free trade area without political union. How would this work?

Remember that the EU is a place of collective agreement; a space in which politicians from 28 countries agree on countless issues that help businesses to trade with each other. Richard Corbett, a respected and experienced European political figure and a Labour MEP candidate for Yorkshire and the Humber, says: “EU legislation actually cuts red tape by replacing 28 divergent sets of national rules with a single set of pan-European common rules for the common market. This saves businesses from duplication and compliance costs.”

There are two points to make from this. First, if there were no EU Corbett’s observation would be felt painfully by British businesses, particularly by small and medium sized businesses that make up the majority of the UK’s private sector. This would almost certainly introduce barriers to exporting, particularly for SMEs who do not need new barriers in their way.

Considering 60 per cent of the UK’s exports are to Europe, it is conceivable that these new barriers could be a threat to the current level of business enjoyed by our SMEs. This would be a threat to revenue and therefore to jobs.

Second, if UKIP wants to remain a trading partner with the European Union, it would subject British businesses to a set of rules that Britain has no role in creating or changing. Individual countries within the EU would continue to agree standards and laws to which UK businesses would be forced to adhere if they wished to continue trading in Europe.

Rather than return power to the UK, leaving the EU would take power away from our politicians, businesses and our citizens.

55 Responses to “What would really happen if Nigel Farage had his way?”