Do the international community have the courage to stand up to the Thai army? 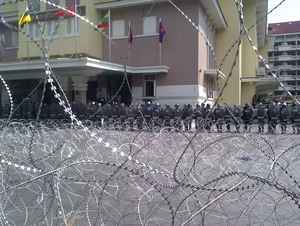 Do the international community have the courage to stand up to the Thai army? Andrew Spooner reports from Thailand

On the pages of this site only less then two weeks ago the likelihood of a military intervention in Thailand was both discussed and predicted. That prediction was greeted with derision and scorn by “serious analysts”and many Western journalists in Bangkok.

Sadly that prediction turned out to be correct. After declaring martial law on the 20 May, the Thai Army made their move today, 22 May, tearing up the constitution, arresting political leaders and imposing repressive rule-by-decree across the entire country.

The reaction of the international community to this destruction of Thai democracy has been insipid to say the least. The US seemingly refused to give the Thai prime minister safe-haven at their Embassy and then released a statement that made strong noises but stopped short at withdrawing long-standing US-support for the Thai military, claiming that that relationship was now “under review”.

The UK and the EU both released statements that stopped short of outright condemnation, something which the French President, to his credit, was quick to do. It is almost certain all will recognise the coup government even if that government is clearly in breach of international law.

Thailand’s caretaker civilian government are reportedly making plans to hand themselves into the military – no doubt in fear for their lives – and lacking any concrete international support it’s unclear what other choice they may have.

The UDD – an organisation that in effect represents the mainstream of the pro-democracy Red Shirt movement – was in the process of staging a large protest in the suburbs of Bangkok, but has now had its entire leadership arrested, some being dragged off by armed soldiers to an uncertain future.

The Red Shirts will now almost certainly be in the frontline should any violence occur with dubious claims by the BBC that there are “several thousand” armed pro-democracy activists being denied categorically by the UDD leadership.

Readers should also be reminded that during pro-democracy protests held in 2010 against the illegitimate army-sponsored ‘Democrat’ Party government, the Thai Army killed almost 100 unarmed Red Shirts and their supporters.

There is a very real danger that Thailand could now slip into a full-blown military dictatorship more akin to Burma than the democracy many ordinary Thais hoped it could be. Many on the anti-democracy side, all of whom are closely allied to the Thai Army, have been outspoken in their aim to have an appointed parliament to run the country.

But there are also very real dangers for the Army themselves. They are not unified, and are riddled with corruption with various factions competing for the spoils on offer – the Thai Army is also notorious for its links to criminal activities. In addition, the Thai Army doesn’t have a reputation for being much good in a fight. In 2010, when confronted with a tiny group of armed men, 1000s of Thai soldiers fled, abandoning weapons and armoured personal carriers.

There is also a risk of a ‘coup within a coup’. This coup is not likely to go down very well with the conscripted rank and file, and many officers are sympathetic to the pro-democracy side – they could take action. Yet the Army continues to be fully backed by the US, who maintain long-term and very committed relationships with them, despite the Thai Army’s reputation for massacre and coup.

So what comes next? Off the record sources we’ve spoken to have already indicated that some members of the pro-democracy movement are getting ready to go underground. Whilst the BBC’s claims regarding a large Red Shirt armed-wing appear to be complete fantasy, there are likely ad hoc pro-democracy armed groups operating outside any structure.

That lack of structure creates other dangers – staged attacks by provocateurs determined to damage the reputation of Thailand’s pro-democracy movement and legitimate ruthless repression.

What most commentators seem to agree on is that the potential for quite serious violence is very real. It also seems clear that the international community lack the will and the courage to stand up to Thailand’s fascistic Army, cut off their supply of weapons and bring the Thai generals to account via the UN Security Council and the International Criminal Court.

Unfortunately this is likely to get a whole lot worse before it gets better.