The BNP has now fully returned to its old Nazi-style antisemitic heritage: and the torch is passing to BNP Youth. 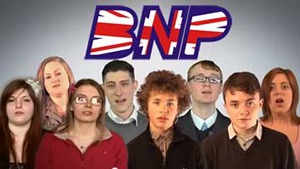 This is not neo-Nazism, it is old original Nazism, echoing Mein Kampf and Der Steurmer

The BNP seems set for a whitewashing in today’s European and local elections, but as the ballot box recedes, so the party has now fully returned to its old Nazi-style antisemitic heritage: and the torch is passing to BNP Youth, a new generation of great white hopes, destined for the same old futile, stupid, antisemitic dead end.

There is, however, nothing modern about BNP antisemitism, not even when they swap the word “Zionist” for the word “Jew“ (as advised here by party leader, Nick Griffin).

It is a very serious antisemitism that blames Jews for nothing less than the destruction of European nations. This is not neo-Nazism, it is old original Nazism, echoing Mein Kampf and Der Steurmer.

In public broadcasts the party still targets Muslims for ugly racism, but within its own circles the deeper antisemitic ideology is resurrected. Nick Griffin shows the way in this BNP TV video, entitled ‘Europe Rises Again’ (note that wording, ‘rises again’). It was filmed in March at a far-Right conference in Rome. From about 55 seconds to 2 min 08 seconds, Griffin warns against globalisation and (from 1.20) “another Zionist war” that wants the “blood” of Europe’s young men. Then (from 1.40), it is Europe’s nations being:

“murdered…cold-blooded, calculated and deliberate by the Zionists, the neo-Cons and the capitalists”.

Where Griffin leads, BNP Youth follows. Their recent video, ‘BNP Youth Fight Back’ has been understandably ridiculed, but is no laughing matter. It is under three minutes long and begins with BNP Youth Organiser Jack Renshaw decrying the enforced “bastardisation” of the British people. Other young faces follow, demanding to know who is responsible for a range of crimes, from national debt to poor education.

The answers come next, beginning at 1.14 with “the banksters” (yes, “banksters” again). Then, at 1.20, an especially well-worn scapegoat:

“The heartless Zionists, who’s interests are foreign interests, who send our soldiers to fight and die for private profit of greedy politicians.”

In another BNP TV film ‘Spreading Truth To Youth‘, Jack Renshaw is simply bizarre (see 10.10 to 11.15), moving from “anti-bankster” (that word again!), to attacking the Rothschilds, to denying antisemitism, and even claiming “Talmudic” Jews are regarded by other Jews as “Satanists” (Judaism has no such concept.)

“racist, fascist, or whatever…eh…Talmudic word you want to throw at us”.

It would, like the BNP Youth Fight Back film, be funny were it not so serious. As an absolute minimum, you have young men and women who care deeply about their country, but are being led into a futile life of stupidity, hate and anger, railing against invisible enemies and rendering themselves less employable every time they feature in one of these films.

For Jack Renshaw, the damage may already be done. It can be seen in yet another short BNP TV film, ‘Nationalism not Globalism’, in which he claims (1.15) that the European Union can only be explained as the first stage of a “global New World Order”, wrought by “cultural Marxists” and “capitalists”. Again, (2.20 to 2.47) it is about “the banksters” and specifically the Rothschilds who allegedly want to enslave the world with trillions of pounds of debt.

Returning to unspecified “cultural Marxists” and “financial institutions”, Renshaw (3.52) claims they are:

“trying to mongrelise the races of the planet”.

This is plain old fashioned racism, it fits National Front templates from the 70s and sounds like older Nazism. Sure enough, Renshaw strikes upon a lesson from history. He says the BNP should stand for elections so as there is (5.05) “a lion among the lying treasonous traitorous bastards”. Then (5.14):

“Eventually when nationalists get to power, because it will happen, its inevitable, we’ll be able to hang those treasonous”.

At this point he stops and the applause takes over. Never mind their election broadcasts, this is what the BNP is really about: yesterday, today and tomorrow.

244 Responses to “The BNP returns to its roots: Nazi-style antisemitism”