New analysis by the economic consultant Howard Reed supports Piketty's view that inequality is on the rise. 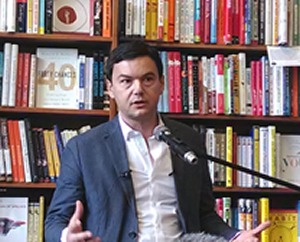 Right-wing journalists and commentators were cock-a-hoop this time last week after Thomas Piketty, whose bestselling book Capital in the 21st Century has taken the left by storm, was accused of cherry-picking data to support his view that inequality in on the increase.

The Financial Times was at the forefront of the attacks, with its journalist Chris Giles highlighting what he perceived to be “a serious discrepancy between the contemporary concentration of wealth described in Capital in the 21st Century and that reported in the official UK statistics”.

But new analysis by the economic consultant Howard Reed supports Piketty’s view that inequality is on the rise. And Reed has hit back at Piketty’s critics, accusing Giles of making “serious errors” of his own.

According to Reed, the apparent discrepancies in Piketty’s account were caused by the author making allowances for the different estimates of wealth in the data sources he used to calculate the trend since the early 19th century. Giles, Reed says, failed to adjust for these “discontinuities” in the data:

“Taken as a whole, these discontinuities imply that the estimate of the top 10 per cent share of wealth is 22.5 percentage points lower by 2010 than it would have been if the wealth statistics had been collected on a consistent basis after 1974, as they were before 1974. As I show, the main difference between the Piketty time series for UK inequality and the Giles time series for UK inequality is that Piketty corrects his data series to allow for this 23 percentage point drop (caused by changes in the methodology used to measure the wealth distribution) whereas Giles does not.”

The coup de grace comes later, however, when Reed says that it is Giles himself who is guilty of an inaccurate portrayal of the figures:

He also accuses Giles of making “serious errors of his own”:

“However, Giles then goes on to make a very serious error of his own in handling the UK data: he treats changes in the way wealth inequality is measured over the decades as if they were real changes in the underlying distribution of wealth. This error leads him to the misleading conclusion that wealth inequality fell in the UK between 1980 and 2010, whereas in fact it has increased (although not by quite as much as Piketty’s published results would suggest).”

Reed does, however, acknowledge that Giles has “uncovered some errors and inconsistencies which Piketty will hopefully address in future work”.