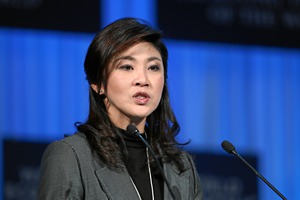 The last week in Thailand has been tumultuous. The caretaker prime minister, Yingluck Shinwatra – who won a huge electoral landslide in the 2011 elections – was removed from office by the Kingdom’s notoriously politicised Constitution Court.

The Constitution Court’s decision was based on flimsy evidence and upon an absurd premise – that Yingluck’s government transferred the previous regime’s national security advisor, Thawil Pliensri, to a different position.

Of course such transfers are common practice in a democracy. Thawil wasn’t sacked, just shuffled to the side. It should also be said that in a more normal situation a standing security advisor with clear political affiliations to the previous regime would do the honourable thing and resign once a new government took office.

Not so Thawil, whose political allegiance to Thailand’s anti-democratic PDRC movement is so explicit he was pictured recently kowtowing to a notorious army-linked ‘Buddhist’ monk, Buddha Issara, who is the leader of one of the most violent factions of the fascistic PDRC.

The international press’s condemnation of the Constitution Court’s decision has been almost universal. The Economist described the court’s decision as a “measure of quite how far Thailand has fallen”; the New York Times called it “a coup by another name”; and Foreign Policy magazine derided the court as having a “dark, sordid history”. Not that any of this helps Thailand’s beleaguered democracy much.

In the last 24 hours a convoy of Thai Army armoured personnel carriers has been spotted on the move in Bangkok and the violent and thuggish PDRC have taken to the streets again, backed, once more, by the Eton-educated and British-born, Abhisit Vejjajiva, the leader of what Time magazine described as the “hilariously misnamed Thai Democrat Party”. As this post is being written, the PDRC – who have been ‘protected’ by Thai Army soldiers throughout almost their entire six month rally – have taken over TV stations and are trying to seize Government House in an attempt to impose an unelected and unconstitutional ‘Peoples Commission’ on Thailand.

This entire situation – wherein the politicised Constitutional Court and their allies in the PDRC work in tandem – can easily be analysed as a slowly unfolding de facto coup d’etat.

Substantive sources also claim that the Thai Army are about to make a more explicit move against what remains of Thailand’s democratic system. A former Thai cabinet minister, Jakropob Penkair, who has high-level contacts throughout Thailand, told me that “there is an ongoing attempt to stage a coup in the next few days”. He added that “the intention is to take a lead before the red-shirt pro-democracy supporters can regroup.”

Another insider, former MP and member of the Thai equivalent of their Foreign Affairs select committee, Jarupan Kuldiloke, said to me that while she felt a military coup might not happen that the Constitutional Court and the PDRC street chaos working together are “exactly the same thing”. Jarupan also said that there were “significant rumours” that a military coup might still take place even though she remained uncertain.

Such rumours and speculation are not without precedent – the Thai Army has staged 18 coups, the most recent being in 2006 which removed Yingluck’s brother, Thaksin Shinawatra, only a few weeks before an election that he was absolutely certain to win. To add to this present background noise of military intervention, the Bangkok Post’s well-connected defence correspondent, Wassana Nanuam, published an article in the last few days in which she stated that for the military “the prospect of a coup is looking more appealing”, with one anonymous Thai Army commander stating that “Events will let us know if a coup is necessary”.

Ultimately a more explicit military coup may not come to pass in Thailand; but what is certain is that Thai democracy has suffered considerable damage. It is also clear that the vast majority of Thai voters understand democracy and use their vote, as is the case in all democracies, to the best effect they can.

Today, Saturday 10 May, over 100,000 pro-democracy Red Shirt activists gathered in a suburb of Bangkok to express their resistance to the Thai establishment’s moves to derail a fairer, more accountable society. That powerful and supposedly ‘educated’ Thais – like the cabal of well-groomed thugs in expensive suits who lead the PDRC/Democrat Party – are so ready to destroy Thailand’s hard fought for democratic gains whilst risking civil war, reveals them to be closer to nihilists than a credible political alternative.