Bradley Allsop looks at why the Green Party is increasingly popular among young people. 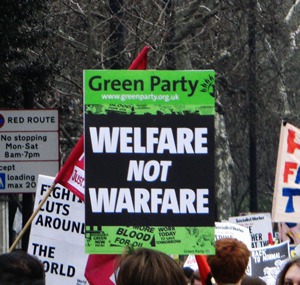 Support amongst students for the Greens is on the rise. According to a recent poll carried out by YouthSight, Greens have overtaken the Lib Dems (and, mercifully, UKIP as well), with 14 per cent now saying they’d vote Green – more than UKIP and the Lib Dems put together.

This means the Greens are now more popular than ever as the third party amongst those in education. Why?

1. Being forward-looking: In a demographic dominated by progressive-minded young people, Greens have refused to pander to the rise of UKIP by spewing hatred and divisiveness – while the coalition government cruelly restricts international students coming to study, and recently deported an A-grade school girl – not to mention the now notorious #gohome vans.

Instead, they have rejected scaremongering, whether by mobilising against the EDL on the streets or campaigning against the politics of hate in the run up to the May elections. The rise of the nationalist right may have pushed many into finding a counterbalance – one that does not capitulate to anti-immigration rhetoric.

2. Left-wing: A lot of students are clearly left-wing – at least if the answers to other questions posed in a recent Tab survey are to be believed – and with Labour failing to offer a clear anti-austerity alternative, they’re realising the Greens are the only viable left voice out there, especially after the tuition fee scandal. The recent sell-off of the student loan book and real-terms pay cuts to lecturers have got students angry – and they know where the Greens stand.

3. The Lib Dems: It’s also potentially because the only other party that (ostensibly) fought for students pre-2010 were the Lib Dems, and with Mr Clegg having proven he can’t be trusted, a lot of students may be realising that if they want a better deal, the Greens are the only ones offering it.

They’re the only ones calling for cheap, green and publicly-owned transport, the only ones supporting university staff through the Fair Pay Campus campaign, and the only ones actively engaging with the NUS to put forward a genuinely radical platform.

4. Direction: Finally, students might simply be ahead of the curve and starting to realise that the Greens are the only ones with a holistic vision that really tackles our problems at the root. They’ve realised that there’s too much contradiction and backwards logic in the other parties, most of whom lack any really clear direction.

The Greens have a rounded, debate changing, and democratic vision that students are starting to realise is what this country needs. The recent floods highlighted the need for a party that is clear on climate change, and with fracking high up on the media agenda the Greens have got their ecological position into the public eye.

What the poll also shows is that the party still has a way to go, with Labour topping the survey at 43 per cent and the Tories second on 24 per cent. But with the Greens now the third party amongst students, it’s onwards and upwards from here.

Bradley Allsop is a member of the Young Greens

7 Responses to “Young greens: why the Green Party is increasingly popular with students”