It’s not just that we’re denied space to make the argument, it’s that we’ve failed to make a convincing case for human rights, argues Andrew Noakes. 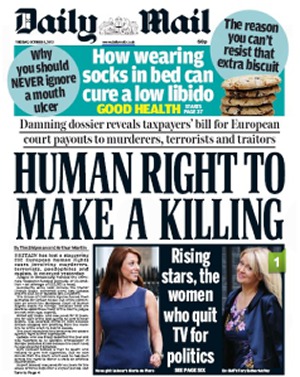 It’s not just that we’re denied space to make the argument, it’s that we’ve failed to make a convincing case for human rights, argues Andrew Noakes

Next week the Labour Campaign for Human Rights and the Society of Labour Lawyers will come together to co-host an event on how Labour can best defend its most important human rights achievement while in government – the Human Rights Act (HRA).

With the Tories threatening to repeal the HRA and withdraw from the European Convention on Human Rights (ECHR), which the HRA incorporates into UK law, and the media and public largely sceptical about human rights in general, we who desperately want to defend the HRA and ECHR face a difficult road ahead.

The familiar refrain among defenders of the Human Rights Act is that the Tories and the media are conspiring to get rid of human rights. If only we had more of a platform or our allies were a little bolder we’d be able to get our message across and turn the debate around.

But the truth is the problem runs deeper than that. It’s not just that we’re denied space to make the argument, it’s that we’ve failed to make a convincing case for human rights. We’ve been too easily pulled into fights on the margins, shouting about the importance of universality when the media draw attention to terrorists or criminals benefiting from human rights. We haven’t been good enough at talking about human rights in a way that makes it easy for people to understand the benefits for them.

The task is inherently challenging. If you say you’re defending the Human Rights Act is sounds more like you’re defending a document or an abstract set of principles rather than anything that has relevance to people’s lives. The same goes for defending human rights in general.

Commonly we’ve deployed the argument that we should uphold our own human rights protections because we’d otherwise set a bad example for other countries. It is gratifying that our high (though imperfect) human rights standards inspire people in other countries to reach for the same, but as an argument used on its own it risks exacerbating the sense that human rights have no relevance to the British people.

If we’re going to turn this debate around we need to concentrate on what human rights deliver for ordinary people. The HRA and the ECHR have helped to protect women suffering from domestic violence, elderly people in care, and LGBT people seeking equal treatment with respect to inheritance. We need to draw attention to these cases and others like them to show what human rights actually mean in practice.

We also need to show working people why human rights matter in employment. Human rights stop you from being sacked or disadvantaged because you’re gay, a woman, HIV positive, a member of a particular religion, race, or ethnicity, or indeed a member of a union. We still live in a society where people lose out because of these things all the time. Workers will instinctively understand the value of non-discrimination in the workplace.

And we shouldn’t be afraid to ask whether there can be reform to our human rights framework – reform that strengthens rather than diminishes it. Too often we’ve simply defended the status quo even when it’s flawed.

Next week, LCHR and the Society of Labour Lawyers will start a conversation about all these issues and questions. And then LCHR will go on to campaign in defence of the HRA and the ECHR. Our ambition is to help Labour deliver a robust defence of human rights as we head into the general election season. The effectiveness of that defence could make the difference between retaining or losing these vital protections.

Andrew Noakes is chair of the Labour Campaign for Human Rights