Faced with the prospect of a capacity crunch in energy supplies, the Mayor is content to sit back and write another column attacking renewables. 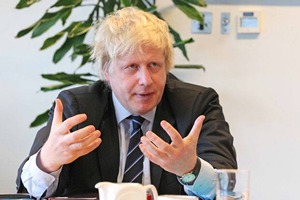 Faced with the prospect of a capacity crunch in energy supplies, the Mayor is content to sit back and write another column attacking renewables, writes Murad Qureshi AM

The secret is out. London is growing and growing fast. London’s population is expanding at a rate of roughly 100,000 per year. Population expansion on this scale places considerable extra demand on our infrastructure, from trains to buses to school places and hospitals. It’s only in recent months though that the full implications of this for London’s energy security have come in to focus.

Despite increasing awareness of the need to grow more sustainably, too much of London’s expansion has not counterbalanced by the same in growth in sustainable energy infrastructure to power the capital.

You don’t have to look far to see this. From the roof of City Hall on the South Bank, London is fast becoming a forest of cranes. New developments are going up all the time adding ever increasing demand on our dwindling energy supplies.

In the June of 2013 the energy regulator Ofgem reported that pressure on the national grid is likely to increase substantially in the years ahead as older power stations are decommissioned and a reliance on insecure gas imports leaves little room for maneuverer.

How serious is this really?

Ofgem state this could leave the UK’s spare electricity generating capacity at just two per cent in 2015. It’s a serious enough proposition to make the powerful sit up and take notice you might think. After all, the politics of energy has been a re-occurring theme in British politics in the past 40 years.

During a recent meeting of the London Assembly’s Environment Committee my simple question as to whether the Mayor was on course to meet his 2015 interim targets for decentralised energy production caused a considerable scratching of heads and scrabbling through briefings for an answer.

Seemingly unaware that such an interim target existed, I was asked if I meant the final target deadline – 2025. I repeated that I did not. I wanted to know if these targets were serious or not. I wanted to know if London was on track to develop the kind of local renewable energy infrastructure that could offer cheaper, cleaner and more sustainable supplies for future generations of Londoners.

The answer, when it came, was complacent and deeply concerning. We are “behind progress” because of the time it takes to bring together commercially structured projects.

I wouldn’t disagree that establishing a network of local decentralised power sources are time consuming and complex projects. But I also know that the Mayor has outlined a massive reduction in funding in 2014-15 for the department that houses the GLA Environment Team to £19.9m and also again in 2015-16 to £10.7m. If the Mayor was serious about insulating London against energy shocks, the necessary resources would be provided to his officers.

The tragedy of this story is that London could be world leading in decentralised energy. We already have inspirational projects like the Brixton Energy which demonstrates how communities can be directly involved in energy generation. It is extraordinary that we make such little use of solar panels on London roofs. Incredibly, the North-East and Scotland has seen more PV capacity installed than London.

This is perhaps hardly surprising given the Mayor’s own off-script interventions on energy, including attacking wind farms as “unable to pull the skin off a rice pudding”. These contributions are unhelpful at best and at worst damaging to London’s green economy.

Energy Security is about far more than keeping the lights on. It’s also about reducing carbon emissions and cutting energy costs both for domestic consumers as well as public bodies. The fact that TfL’s electricity costs have risen by 50 per cent compared to when the Mayor took office (even though consumption only increased by 17 per cent) should be ringing alarm bells at City Hall. A point put to the Mayor’s advisor during the committee hearing.

The response received? “LU’s core business is running the trains” and therefore presumably should not overly concern itself with how they are powered. Although there is scope for TfL to benefit from the Mayor’s licence lite initiative where smaller producers could sell power to public bodies, there is no real appetite to do anything too radical.

That for me is the nub of the problem. Faced with the prospect of a capacity crunch in energy supplies, the Mayor is content to sit back and write another column attacking renewables instead of working harder to get more decentralised energy projects up and running.

Modest renewable power projects might not be as sexy as multi million pound rail links or glossy new routemaster buses. There might in fact be no red tape for you to cut. But new energy infrastructure is still every bit as important.

It’s a cavalier attitude to London’s energy security, and one the Mayor may soon live to regret.