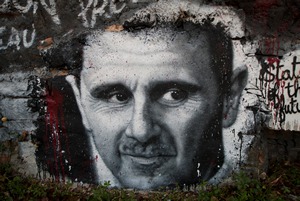 The humanitarian disaster that engulfs Syria continues to be an object of media fascination. Journalists in the West, whose families are not threatened by government militias or gangs of jihadis, postulate and probe the situation from a distance.

The impetus for intervention has passed, and so the media consensus, ever fluid to the needs and wants of readers, has shifted. Now newspapers seem to be content to gawk at the hideous and seemingly unsolvable violence, and commentators are happy to broadcast the comforting inanity that we were right to stay out of the conflict.

The most recent example is the Telegraph’s Peter Oborne: a political columnist who has been uprooted and dropped into the most violent and bloody nation in the Middle East. Consequently, he does not leave the relative safety of Damascus, and produces his copy from a government district. In doing so, he is safe from the fighting, and, it appears, the facts.

Let us review those facts. Peter Oborne, who has not seen any rebels, or travelled to any rebel areas – summarising the inherent weakness of his reportage with a single, breezy clause: “I have not spoken to the opposition” – manages to draw an entire article, a thousand or so words in length, from a single, unalterably biased viewpoint.

In his conversations with the citizens of a government controlled region, he manages to turn propaganda, by some feat of factual transfiguration, into ‘truth’.

And why shouldn’t he? After all, it fits the narrative he is trying to create, one in which President Assad – a thuggish, brutal dictator, whose forces have been described by Philip Luther, director of Amnesty International’s Syrian activities, as “committing war crimes by using starvation of civilians as a weapon of war” – is a nice man who occasionally gets stuck in traffic jams.

Oborne, who despite this episode, remains a journalist I respect immensely, should not be allowed to get away with writing the following nonsense: “I am well aware that the government has committed dreadful atrocities, though I suspect that some of the accounts have been exaggerated.”

In a single sentence, in which he introduces no supporting evidence, no new insight of note, Oborne denigrates the tales of outrages committed by the government.

But, without reference to someone credible, or serious investigation from the man himself (of the sort that, had it occurred, Oborne would not exactly shrink from detailing for the public) this utterance cannot possibly stand up.

Oborne slavishly, and masochistically, repeats the propaganda that the President, head of a government which has used chemical weaponry, possibly multiple times, on civilian areas, can sometimes be seen driving to work from his “relatively modest flat”. Is it too hard to suggest that this story – one of a particular genre: many a Soviet poster showed the unassuming way in which Stalin spent his days -might have originated from, or been supplemented by, one of the minders who accompanied our hero for “much of the time”?

But the worst error Peter Oborne makes is one of classification. He suggests first that there are “no ‘good guys'” in Syria. That is utter rubbish: there are no good guys if we only count the regime and the religious fundamentalists. There are secular democrats in Syria, and, because of the prevalence of those mentioned previously, they need our support. Oborne’s thinking discounts, and does a major disservice to, the Kurds, for one thing.

It is not a zero sum game between the mullahs and the government murderers, and it is both foolish and misleading, for someone in Oborne’s position especially, to suggest otherwise.

All the while, the crisis is not stopping. There is no winding down of the violence and horror; not because those in the West have other things to worry about, in Ukraine and elsewhere, and certainly not because Peter Oborne suddenly appears to back Assad.

Meanwhile, out of the bounds of this sub-academic speculation, the deadline for the destruction of Assad’s chemical weapons hoard is running out. The number of total refugees from the conflict has passed the 2.5 million mark. At the beginning of this year, the UN even suspended the counting of the dead, such is the virtually unimaginable scale of this tragedy.

That cannot be dismissed with a glib line or two about the nastiness of all those Islamists Peter Oborne has never met.

This article ought to serve as a warning. This sort of writing occurs when commentators masquerade as war correspondents, and when right-wing, isolatinist ideologues masquerade as unbiased journalists.

James Snell is a freelance journalist