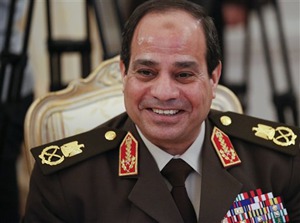 Writing in response to a government inquiry being launched into the activities of the Muslim Brotherhood in the UK, the Telegraph’s defence editor Con Coughlin has called for the Islamist group to be banned, saying that it “would be a welcome step in the war on militant Islam”.

The Brotherhood have already been outlawed in a number of authoritarian Arab states, including British allies Saudi Arabia, the United Arab Emirates (UAE) and, most controversially, Egypt, where thousands of their supporters have been massacred by the military authorities since July.

Oddly, however, Coughlin’s article makes no mention of the ongoing crackdown in Egypt, the brutality of which is said to surpass even the worst days of military rule under Gamal Abdel Nasser. Instead, Coughlin praises last summer’s coup, which brought the military to power:

“Thankfully, in this case, a semblance of order has been restored after the military authorities, aware that the ancient country was about to take an irreversible step back towards the Middle Ages, decided to intervene and eject the Islamists from power.”

This statement is really quite incredible. To begin with, it asserts that “a semblance of order has been restored” in Egypt by the military takeover last July. In actual fact, the reverse has happened, as Michele Dunne and Scott Williamson of the Carnegie Endowment for International Peace have made so abundantly clear.

According to their research, “Egyptians have suffered through the most intense human rights abuses and terrorism in their recent history in the eight months since the military ousted then president Mohamed Morsi”. The country is “far more unstable and violent than it has been in decades”, with “government repression driving a cycle of political violence” which is unprecedented in modern Egyptian history.

Terrorism has increased by a factor of ten, with 281 people killed within the first seven months of Morsi’s ouster compared with 28 during Morsi’s year in office. Terrorist operations have also expanded beyond the Sinai into the Egyptian mainland, with attacks reported in 12 provinces since the coup.

The rise in government repression has also been massive. According to Wiki Thawra, an initiative set up by the Egyptian Centre for Economic and Social Rights (ECESR) to document political violence and arrests since 2011, at least 2,528 civilian demonstrators were killed in the first seven months of military rule, with 36 massacres and a litany of other government atrocities being reported.

The crackdown has also seen at least 21,317 Egyptians arrested, a number which again far surpasses anything which took place under Morsi. This has led to a sharp increase in reports of torture, rape and “electrocution” of political detainees, as well as allegations that forced virginity tests for female protesters – a practice endorsed by presidential candidate Abdel Fattah El-Sisi – have made a gruesome return.

Coughlin’s claim that “a semblance of order has been restored” is therefore demonstrably false. And in fact, if Coughlin has paid even the slightest bit of attention to events in Egypt over the last nine months, he will know it to be false. So why, then, does he make the claim, if not to spin for Egypt’s new rulers?

In July, commentators could perhaps be forgiven for falling for the claims of the Egyptian generals that they were ‘restoring democracy‘ in Egypt by overthrowing the first democratically elected government in the country’s history. In hindsight, however, this view is simply not credible. Rather than “restoring democracy”, it has become clear that Egypt’s new government is committed to resurrecting a tyrannical military regime which is vastly more repressive than any of the governments before it.

Coughlin’s continued endorsement of the coup, even after its bloody results have become so horrifyingly clear, is therefore wholly unethical and, indeed, quite shocking.

Coughlin justifies his support for authoritarianism by explaining that, however much “the BBC and others of a lazy, left-wing persuasion” might like to claim otherwise, “there is no such thing as the Arab Spring”. Rather, the Arab uprisings can be explained as “a battle for political supremacy between rival political elites”.

Again, the evidence to the contrary is overwhelming, whether one looks at the mass demonstrations in support of democracy in Bahrain, ongoing protests against President Bouteflika in Algeria or the women’s campaign for the Right to Drive in Saudi Arabia, which also took its inspiration from the Arab uprisings in 2011.

The success of Tunisia – which according to Freedom House has been “transformed from a showcase for Arab autocracy into an electoral democracy” – also stands as an encouraging reminder of the Arab Spring’s potential for achieving real change in the region.

Coughlin, however, is highly critical of those who side with the protesters, and in particular laments the British government’s “alarming tendency” to support demonstrators in the Arab world and intervene on their behalf. In particular, he points to Libya and Egypt as examples of “previously stable north african countries” which have been “plunged into chaos” by British support for democratic revolutions.

This, again, is a quite remarkable claim to make. Prior to British military intervention in March 2011, Libya was being savaged by a civil war, while Egypt was experiencing a full-scale uprising during which hundreds of protesters had been killed by President Mubarak’s security forces. Coughlin’s assertion – that both countries were stable until Britain got involved – is therefore patently untrue.

Furthermore, by glossing over the atrocities committed by Gaddafi and Mubarak during the Arab uprisings, it is hard not to see Coughlin’s claim as anything other than spin for the ‘secular’ Arab despots who ruled Libya and Egypt until 2011.

As for Coughlin’s proposed ban on the Muslim Brotherhood, which like his interpretation of ‘stability’ also mirrors the line of various Arab dictatorships who have recently outlawed the organisation, several problems come to mind.

Firstly, a blanket ban on the group will make it nearly impossible for non-violent Muslim Brotherhood members at risk of being tortured and killed in their own countries to seek political asylum in the UK. The Brotherhood’s ideology might be abhorrent, but Britain must not shirk its responsibility to provide protection to all victims of political persecution, including peaceful Islamists.

Secondly, banning a group facing severe repression across the Arab world will send a green light to Britain’s authoritarian allies to continue their crackdown on the Brotherhood, which has already led to massive human rights abuses in Egypt and the UAE. It would also fly in the face of Britain’s own commitment to upholding a pluralist democracy within its own borders, where intolerant views are tolerated and then subjected to fierce public scrutiny.

Unfortunately, Coughlin’s view of the Arab Spring, Egypt and the Muslim Brotherhood seems to reflect more the positions of authoritarian governments in the Arab world than the liberal values of a pluralist, Western democracy like ours. In particular, his stubborn endorsement of the military coup in Cairo last summer should be a source of immense shame.

8 Responses to “Order has not been restored in Egypt: a reply to the Telegraph’s Con Coughlin”